Every now and again we have class periods that make us happy. The fun ones, during which everyone is engaged in the lesson, the room is filled with an infectious energy, and at the end you are sure that everyone, or at least nearly everyone, got the point.

I had one of these classes recently. We were reading The Crucible and in order to understand the political climate that prompted Miller to write it, students adopted personas of key figures in the Red Scare that gripped America during the 1940’s and 1950’s and participated in a mixer activity. Students milled about, introducing themselves, asking questions and taking notes. Even my hesitant students, while initially less enthusiastic than their counterparts, warmed up to the idea, and soon I had puffed up Joseph McCarthys spouting anti-communist rhetoric and sheepish Elia Kazans who just realized they were talking to the Hollywood 10. After, there was small group and then class discussion, followed by writing time, where they made connections to the play itself.

That night I sat down, excited to read the responses, sure that they would be brilliant. And they were good, maybe not brilliant, but it was clear that students were making the connections I needed them to. I was happy. Then I got to John’s.

“I really wish you wouldn’t make us do so much talking. It sends my social anxiety through the roof.”

John* is in my 2ndst period. He is tall with a baby face, and dark, asymmetrical hair that hangs over his right eye. He qualifies for an IEP under ED-Emotional Disturbance, not that you’d immediately know it. John comes across as shy and respectful, and he’s a pretty solid writer. He’s thoughtful and consistently participates in his own quiet way, never drawing attention to himself. Earlier in the year, John struggled with the group of rowdy boys he was assigned to work with, but he didn’t argue or cause a scene. He simply stayed after one day and asked if there was a way he could be placed in another group. When we spoke, he kept his eyes to the floor, his voice soft, and there was a slight stutter in his words. In that moment, I became aware of the incredible effort it took for him to make a request like this.

I can relate to John. I, too, know what it’s like to want to remain unnoticed, to be allowed to complete my work in solitude and silence. At sixteen, the idea that I could be assigned to a group of students I didn’t know and trust put knots in my stomach, and approaching an authority figure made my entire body tremble, my face and torso turn scarlet, and my once coherent thoughts race to the furthest corners of my brain. I sometimes found myself so gripped with irrational fear that I couldn’t even form words.

I’m fortunate because my social anxiety is something that age has softened significantly. As I moved through my 20’s and 30’s, and my personal and professional life found its footing, I worried less and less. I gained the ability to speak out in meetings instead of constantly looking at my notes in the hopes that no one would ask for input, and at parties I no longer stood in a corner, horrified that someone might actually try and start a conversation.

However, the monster does rear its ugly head from time to time. Not long ago, I was called in to advise a small group of colleagues on our school’s new evaluation system, and as I answered questions, one of them reached over and touched my hand.

I was well aware of my involuntary response, but now instead of freezing, I could say,“I know. It’s OK. It’s just what my body does sometimes.”

At the beginning of this school year, my monster made an appearance when I was least expecting it. I wasn’t presenting, or advising, or even speaking to anyone. I was reading. I was in a professional development session and our presenters, on the premise of engagement, had designed it around “No Opt-Out,” a concept promoted in Teach Like a Champion by Doug Lemov, who, like all self-proclaimed educational experts peddling their wares, claims to have the answer for all students. In his book, Lemov includes scenarios in which a student either answers incorrectly or with the ever-popular “I don’t know.” The goal is to get that student to say a correct answer, multiple times if possible. Using various scenarios, he illustrates the “No Opt Out” method, and it was Lemov’s scenarios that triggered my shaky hands and burning cheeks.

In chapter one of Teach Like a Champion, the first scenario involves a surly “Charlie,” who when asked the solution to 3x8, grumbles, “I don’t know” and looks out the window. The teacher then enlists the help of “Devon” his classmate. Devon answers correctly, and the teacher returns to Charlie, “Now you tell me Charlie, what’s 3x8?” In another version of the scenario, he has the class chant the answer before returning to Charlie. The chapter continues with similar scenes, this time with James, whose only crime is giving an earnest, however wrong, answer. (Lemov, 2010, p.28-33)

I wonder if Lemov ever put himself in Charlie’s shoes, or thought about the reason behind the “I don’t know.” What if Charlie had a screaming match with his dad before school? What if he’d spent a restless night on his cousin’s couch because his family had been evicted from their apartment? What if another student in the room bullied him earlier? What if, like John and me, the mere thought of speaking before the class paralyzed him with fear?

I also wonder if Lemov was aware of the possible subtext. A student could very well interpret “Class? What is 3x8? Now you, Charlie.” as “Class? Will you show Charlie how you all know the answer and he doesn’t?”

In my professional development session, we sat in table groups, and when reading was finished, we were directed to discuss how we might include “No Opt Out” in our own classroom.

“Does anyone else see this as cruel?” I blurted out, unable to contain my anger.

“What do you mean?” asked my table mate.

“I mean that I can imagine myself as that student who didn’t know the answer. I would have been humiliated. I would have completely shut down.“

“I can see that,” he responded.

The conversation then shifted from how we would use “No Opt-Out” in our rooms, to the reasons that students do opt-out. We acknowledged that, yes, there are those who are simply task-avoiders, but, especially in a high poverty school like ours, there are those who come to us hungry and over-stressed. There are those like John and myself, who struggle with anxiety. These students are not likely going to want to engage if they feel backed into a corner, and these are the students we are most desperate to reach.

Lemov claims that negative reactions are uncommon and that the “tone of No Opt Out in most classrooms is astoundingly positive and academic.” (p. 31) However, I would challenge that what Lemov refers to as “worst-case samples” involve students who are our most fragile. Reference: Lemov, Doug. (2010). Teach Like a Champion:  49 Techniques That Put Students on the Path to College. San Francisco:  Jossey-Bass. 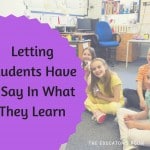 Letting Students Have a Say In What They Learn

Taking the Anxiety Out of Student Placement in Special Education
« What is Complex Math Instruction?
School VALUES, not "Standards" »