Fairness is a battle that is fought in everywhere in the United States. As teachers, we teach about fairness and the difference between what is right and what is wrong. Being aware of bias and unfair situations in the classroom is something I always strive to be aware of and I hope to bring awareness of certain situations to light to make sure that our students are getting the fairness they deserve. This brings up the question: “Is the grading scale fair?” There are several things to consider before you answer this question. What is the current grading scale at your school? In our district, here are the following scales: regular 100-93 A, 92-85 B, 84-75 C, 74-67 D, 66-0 F, then the Honor 100-90 A, 89-80 B, 79-70 C, 69-60 D, 59-0 F. There are several things to consider when deciding if the grading scale you use is fair.

1. Honors Vs. Regular. Regular students must work harder to get an A status. Something seems a little off here. Now in a perfect world, honor classes would be more challenging, but the reality is the majority of honor classes are exactly the same as regular classes. Is it fair for our regular students to be held to a more difficult scale than honors and college bound students when the work is the same? Click To Tweet The scale should be the same for both whether the district chooses the honor or the regular scale.

4. Inconsistent Ranges. Another situation to consider is that every school, every district, and every state has a different grading scale. There isn’t a “national” scale so students from Louisiana may have a higher GPA than a student from California. Does that mean the student from Louisiana is more prepared than the student from California? Not necessarily. As much as the Common Core is disliked, it is attempting to set the same expectations across the states, but all this would be in vain if the grading scale is not standardized as well.

With all these inconsistencies, what is to be done? Well, I am not sure. But when I really thought about this, it changed the way I looked at grading. Part of being a good teacher or even a good member of society is being aware of the lack of fairness in the system. Being aware of these things change the way you look at what is considered “failing.” Raising awareness of an unfair system is the first step to right wrongs.

What Makes a Great Unit? 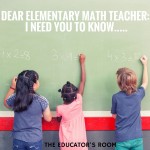 Dear Elementary Math Teacher: I Need You to Know.....