America loves its heroes. From the earliest inspirational days of explorers sailing the ocean blue and “discovering” an unruly wilderness that would become the United States, to Teddy Roosevelt and his Rough Riders, to the canonization of Steve Jobs (notably by Ashton Kutcher is this film). Without a doubt, many of these heroes deserve their limelight. They have shaped American culture, inspired ambition, and present possibility for folks of all ages. American heroes fulfill the essential qualities of Horatio Alger’s American Dream.

Abraham Lincoln is the essence of this American hero. Born in a log cabin in Kentucky, raised in a farming family, and largely illiterate in his younger years, the Lincoln story is exactly the type of pull-yourself-up-by-the-bootstraps folk tale that America loves. As such, more than 15,000 books have been written about Lincoln (notably, no other person in the world has been written about more than Lincoln with the exception of Jesus of Nazareth). Scholars have obsessed about his quirky personality, his deep moral convictions, his troubling family situation, and his countless secrets.

In 2011, newly minted Lincoln historian Seth Grahame-Smith tackled a previously overlooked central secret of Lincoln’s past: he was a vampire hunter.*

Although it met mixed reviews from critics, Grahame-Smith’s historical take on the heroic Lincoln is a bit more important than it appears at first glance. Sure it is an alterfiction take on a monumental historical figure about which little biographical detail has been left unturned. Sure it includes vampires, moments of head-splitting gore, photoshopped historical illustrations, and questionable characters woven throughout the fabric of American history. But, Grahame-Smith’s take on Lincoln represents an important evolution in the nature of historical biography that will surely impact the teaching of Lincoln and, if history teachers allow, the teaching of history.

At the heart of the 21st century classroom are what the Partnership for 21st Century Skills calls the 4 C’s -- Creativity, Critical Thinking, Communication, and Collaboration. Grahame-Smith’s work surrounding Lincoln presents a formidable opportunity for teachers to address nearly all of these elements. Whether through the Critical examination of Grahame-Smith’s research on Lincoln, the analysis of genre-combining Communication skills that he employs, the almost incomprehensible amount of Creativity that he leverages in the conception of this project, or through the Collaborative effort that it would surely take to unpack the author’s historiography, Grahame-Smith’s take on Lincoln is prime for teaching and learning in a 21st century classroom.

In an era where teacher preparation programs emphasize the lesson “hook”, and students are living in a overstimulated day-to-day existence, history content is in a persistent struggle to find its place in the curriculum. Often lauded by students as “boring”, history teachers work hard to engage students in what they view as timely material. Honest Abe’s vampire hunting habit addresses the disengaged student issue directly, presenting a magnet for student re-engagement and providing an avenue for young people to travel into the life of a great man. The access point presented by this tale of Lincoln will doubtless become a key component for history teachers to consider as they bring our country’s past alive. Sure, teachers will have to deal with the possible reality of vampires, but that topic alone would engage even the most disinterested high school student.

For teachers concerned with the Common Core Standards and testing, Grahame-Smith’s writing presents additional access points for consideration. With his writing most certainly fiction, the function of this fiction as a gateway to non-fiction must not be overlooked. While Grahame-Smith provides very few citations in his work (mostly because he can’t, but also because he doesn’t have to), the amount of historical research the author is basing his writing on is clear. In an unintentional encouragement of 21st century critical thinking skills, the author begs his writing to be researched and examined with a keen historical eye.

While teachers look to engage their students in a comprehensive study of the first part of the 19th century, this novel is close to ideal. It tells of a frontier family dealing with hardships of death and toil in agrarian America. It also tells of a young boy’s psychological journey through these hardships into being a reluctant leader in an incredibly tumultuous times. Teachers can use Lincoln’s midnight ventures and biographical development to delve deeply into primary documents surrounding this era including documentation on homesteading, family letters, and economic data of farming in America. These primary sources, as well as many other expository texts about the life of Lincoln are ripe for examination as companions to this novel.

Additionally, teachers can use students as research teams to unpack all of the author’s supposed facts about Lincoln’s life. While this may prove to be a daunting task, the author does present some breadcrumbs that can be used to pick apart his research. And, for all of its alterfiction claims, the diligent student may even be able to make a case for truth in Grahame-Smith’s claims.

Most importantly, however fun the novel is to read -- and it is quite fun -- its value is far beyond its supposed outlandish premise. Read, enjoy, and consider the possbilities.

*Note: This article is purely about the novel Abraham Lincoln: Vampire Hunter. The movie is a far cry from the book, and deserves attention on its own. Roger Ebert reviews the film nicely, and even though Grahame-Smith wrote the screenplay, the book is much more intelligent than the film. Recommendation - watch the film after reading the book. Don’t set your expectations high. 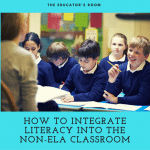