Teaching in Pinole, California over the past twenty years, I can count on one hand the students of Afghan descent I have encountered, let alone taught. As I watched what was unfolding in Afghanistan in the first few weeks of August of 2021, my first thoughts went to my current Afghan student who I have been blessed to know for the past four years. I had her sister in previous years as well. My mind also went back to my first Afghan family from over a decade ago, wherein I also had two of their three sisters. I became close with their families and stay connected to this day.

As I watched the events unfold, I made sure to check in with my current student, being mindful to provide a safe space for her to communicate any feelings or thoughts she might have. Having previous conversations with her on various issues surrounding ethnicity, culture, religion, and gender issues, I knew that she was comfortable enough with me to share things she might not share with others. I asked her if I could do an anonymous interview with her to potentially share some insight on what it must be like to be a student living in America of the Afghan diaspora while watching the events unfold in the land of her parent’s birth.

While she happily agreed, I chose to keep her identity anonymous as she is still a minor, as well as to keep her and her family away from any unsolicited attention or scrutiny. While this interview is in no way intended to speak for all Afghan Americans, it provided me with an insight into a life that I think many Americans fail to acknowledge, let alone have any empathy towards. I learned so much from my student! As her teacher for the past four years, I knew that I had only scratched the surface of her story. What better way to learn than from the voice of a student herself!

What is your family history?

My parents are refugees who immigrated from Afghanistan with their families in the early 1980s due to the Soviet Invasion. My father was in high school, and my mother was in middle school. They spent their entire childhoods in Afghanistan, so their memories are still vivid… I [imagine I] would also [vividly] remember my country and all of the little things that shaped my youth.

What would you say to people who do not know you are Afghan or know nothing about Afghanistan?

My ethnic background is not guessable by most people, especially the younger generation whom I am surrounded by. It is not surprising because I have pale skin, light brown hair, and eyes, and even freckles. That does not erase the fact that I am cultured and Afghan at heart. I’m usually being asked if I’m either White or Hispanic, yet if I say I’m South-Asian, they assume that I’m Turkish or Arab. It is ironic because those countries are not even located in Southern Asia.

Do you think this is typical for members of the younger generation?

This generation is not as educated about Asian countries as much as they think they are. Half of the people I know do not even know where Afghanistan is located on a map. This makes it even more difficult for the Afghan diaspora because we are erased from people’s points of view. Afghans are usually on the bottom of the Gen Z activists’ “advocating lists.”

How is living as “white-passing” in America?

The fact that I look white is technically an [alleged] “good thing” because I have privilege in this society, which most of my family members, unfortunately, do not have. Although I wish I had more ethnic features and looked like my parents, cousins, etc., I also know that my Eurocentric features are unfortunately praised in my community. This is common in every single non-white community because of colorism and the way the “white mindset” is set onto everything. It applies in both South-Asian, Middle Eastern, and numerous other cultured communities, and as much as I know that the older generation finds it “beautiful,” I personally find it annoying.

Does it bother you that people generally know nothing about Afghanistan except for what they see on the news?

I’m not surprised when I see that people do not know anything about Afghanistan. It breaks my heart that I am the only person advocating, and it breaks my heart even more than my own friends whom I rely on so much have never spread awareness as well. Just because it is not your own people who are being affected does not mean you should not help out. Other issues are always actively discussed in schools and society in general, but I have never heard about Afghanistan in anyone's mouths. This is not only a feminist issue because millions of Afghan women are being stripped away of their rights, but it is also a human rights issue. The world has completely forgotten about Afghanistan, and it breaks my heart that my family is being affected every single day, yet no one chooses to speak up.

What would you want others to know about you, your ethnicity, your culture, and your religion?

My culture and religion are NOT something you should feel scared or nervous to talk about. If anything, the Muslim and Afghan community encourages for other people to speak up because we need solidarity from other communities and minorities. Ask questions if you are confused or honestly want to help out. The Afghan diaspora is seriously sick and tired of being the ONLY people spreading awareness, donating, and creating protests about Afghanistan and how to help the Afghan people. If you are a decent human being, you wouldn’t even need to be indecisive about spreading awareness about the situation that is occurring in Afghanistan in the first place.

Have you ever felt alone?

In a place like Pinole [California], you barely see any Afghan students. My family members live in the Fremont and Union City area, and their high schools are full of Afghan students. I wish I could have an Afghan Student Association at Pinole Valley, but I highly doubt it is possible with just one Afghan student in the entire school. Yet I’m relieved because I don’t feel alone. I’m supported by teachers and friends, so they understand how passionate I am about my culture.

How do you feel when people ask you questions about Afghanistan?

Some people have honestly asked me a few questions regarding my ethnicity and what has been happening in Afghanistan recently. One person asked me just to see my reaction- as if they were challenging me and wanted to see me break. Most people know that my country is something I hold close to my heart. They know I’m Afghan, and I have been advocating for Afghan rights, especially women's rights in Afghanistan for as long as I can remember. I’ve gone to protests starting at age 11 and UC Berkeley banquets/fundraisers when I was a little girl. In 2015, a young Afghan girl named Farkhunda Malikzada was beaten and lynched by a mob of men. When I heard about that, especially at a young age, it scarred me. This is not something that you hear often in the media, and I can’t imagine how many other women have experienced similar things as Farkhunda in the last twenty years.

Afghanistan was known for its peace, yet America and the world villainized the country after 9/11. You barely hear anything about Afghans in Afghanistan, especially the women. But if someone genuinely cares or wants to help out in any shape or form, we WANT you to ask us questions. It is honestly better than doing your own research because you will be hearing it from an Afghan perspective, which is barely shown in the media. Please reach out to us if you want to support the Afghan community in Afghanistan and the thousands of Afghan families who have [sought] refuge in other countries, including America. It is better than nothing! 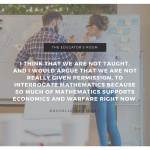 Civility in the Classroom and the Rise of American Fascism
« Teachers Beware: Curse of the Screen Zombie
Dear First Year Teacher: This Is a Time Like No Other »