In years past, I assigned the following essay topic to some of my junior high students: Can your voice make a difference? I've read dozens of essays by students on this topic, and many seem to agree, that alone, one cannot impart change, but together things can be accomplished. Some students cited community efforts led by teens to improve their neighborhoods, others mentioned volunteering for organizations and causes that they believe in.

In the wake of the Parkland school shooting at Marjory Stoneman Douglas, it has become increasingly clear that students can, through their voice and actions, impart change and start a movement. We've seen the survivors of the shooting appear in live discussion forums, Town Hall meetings & gatherings, and on news stations demanding change.

These survivors from Marjory Stoneman Douglas have sparked the #neveragain movement and have inspired students across the country. In solidarity with those in Parkland, many students have organized walkouts in protest of gun violence.

The Spark of A Movement

In Pittsburgh, where I live, students from CAPA, Pittsburgh's Creative and Performing Arts School, walked out, linking arms as part of a silent demonstration to encourage lawmakers to introduce and pass tougher gun laws. Nearly 100 students took part. In addition to the demonstration at CAPA, there are hundreds of student walkouts planned around the country with regard to this issue.

Schools have not been so understanding of the impassioned voices of their students, though. For instance, students at CAPA who participated all received detention for their actions, which school spokesperson, Ebony Pugh has confirmed.

Several more schools have threatened disciplinary action regarding students who protest or participate in these walkouts.  According to Vice News,  Houston, TX Needville Independent School Superintendent, Curtis Rhodes, stated that students who walkout will receive a 3-day out of school suspension. Rhodes went as far as posting via Facebook that...

"There is a ‘movement’ attempting to stage walkouts/disruptions of the school through social media and/or other media outlets...Life is all about choices and every choice has a consequence whether it be positive or negative. We will discipline no matter if it is one, fifty, or five hundred students involved...A school is a place to learn and grow educationally, emotionally and morally. A disruption of the school will not be tolerated.”

A History of Discipline and Activism

These threats of disciplinary action have not silenced the voices of young people throughout the country. Despite any aforementioned consequences, we are still seeing students from Bellingham, Washington; Missoula, Montana; Minneapolis, Minnesota and many others stage protest to impart change.

If we look back through history, we can see how activists and proponents of change were often threatened with disciplinary action, jail time, and even violence. Dr. Martin Luther King Jr. was jailed nearly 30 times throughout the Civil Rights Movement.  Fannie Lou Hamer, in her defense of Civil Rights, was taken to jail in Mississippi where she was brutally beaten. Susan B. Anthony, in her quest for women's suffrage, was arrested and jailed for illegally casting a ballot in 1872.  And, the list goes on.

Fannie Lou Hamer, in her defense of Civil Rights, was taken to jail in Mississippi where she was brutally beaten Click To Tweet

No matter your political stance or affiliation, I think we can all take a look at young people all over the country and be proud. So often teens, especially in this day and age, are portrayed as being self-absorbed and technology obsessed. However, it's clear that this does not paint an accurate picture, as so many are devoted to imparting a change to create a better tomorrow. In the last week alone, I've seen impressive actions, speeches, and testimonials from the Marjory Stoneman Douglas students, in particular. And, the passion and drive of their voices give me some hope for the future. 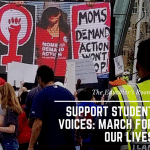 Educators React to the March for Our Lives
« More Than A Teacher
In Defense of My Students...From a Teacher in Florida »