“Did you see this?”  The question came in a text message from my principal, accompanied by a screenshot of a Facebook post by a parent.  The photograph showed a close-up of a child’s finger, but it was the all-caps type and multiple exclamation points that made me catch my breath.  This mother had just publicly accused me of not informing her of a student injury and then lying about it. As my heart rate skyrocketed and my blood pressure surged, I racked my brain for where this was coming from. It had been a typical day at school, with kids eagerly engaged in their MakerSpace projects, and a particular girl had come up to me and mentioned she’d touched the hot glue gun, so I recommended she rinse it under cool water at the sink.  She went back to her creation and I and continued to work with another student.

The bell rang, clean-up ensued, and everybody went home. I hadn’t given the incident another thought until now. I soon received another screenshot, this time of comments below and I was shocked at how quickly the situation was being blown out of proportion: five minutes had passed since the original post and two other parents had already begun a discourse of how “the school never tells them anything”.  Within another few moments, the comment thread had veered into a supposed death threat that was denied by the school, a gang beating at a 5th-grade party, and the school covering up multiple incidents of violence. The principal and I both knew all were false perceptions, but the damage was done: hundreds of Facebook friends had read her posts and assumed the worst, chiming in with their own opinions and theories.

Within another few moments, the comment thread had veered into a supposed death threat that was denied by the school, a gang beating at a 5th-grade party, and the school covering up multiple incidents of violence. Click To Tweet

This particular incident isn’t isolated, either: social media has become a dumping ground for complaints and slights that fester in a cesspool of digital discontent.  Behind the safety and anonymity of a screen, parents, community members, and even students post accusations, grievances, and criticisms without a second thought to their repercussions.  In a split-second of tapping SEND, suspicion, doubt, and rumors infiltrate the sense of support and collaboration within a community. At a recent board meeting in our district, parents were live-streaming the event to air some serious concerns, as is their right and privilege, and one which I fully support.  However, the comments soon ranged from calling administrators mentally unstable to individuals recalling personal anecdotes about overhearing disciplinary action in the office. Not only are many of the social media posts inflammatory, many simply are not true and divulge private information that teeters on the ledge of slander.

Without an in-depth knowledge of school policy, experience as an educator/administrator, or involvement in the day-to-day decisions made for hundreds of children, one cannot simply drop a so-called “truth bomb” on social media platforms and walk away without collateral damage.  Dozens of difficult (and sometimes unpopular decisions) are made every day with multiple factors involved. Special education laws, IEP/504 plans, mental health issues, safety concerns, academic struggles, abuse/neglect, poverty, etc. all play a role in situations handled by a school district.  When a tweet, post, or screenshot is shared without the awareness of all the background information or facts, misinformation spreads like wildfire. The respect and trust placed in the hands of educators are eroded while they are left unable to defend themselves from the vulnerable position of protecting their professional reputations, not violating privacy laws, and basically trying to be the “bigger person”.

Dozens of difficult (and sometimes unpopular decisions) are made every day with multiple factors involved. Click To Tweet

A simple celebratory picture can trigger outrage and condemnation.  On my classroom Facebook page, I was excited to share pictures of a field trip at a local college for our gifted/talented program. That was too much for some parents, as their children’s feelings were hurt that they were left behind at school to do “regular” learning, despite not qualifying for or being part of the program prior to the outing (and despite the fact that the event was open to the public to attend all weekend).  Angry comments and public posting of complaints turned into multiple emails demanding a defense of the program acceptance qualifications, a meeting with the superintendent, and ultimately multiple families leaving the district.

Another picture of smiling students proudly dressed in their superhero costumes and capes for “Read Like a Superhero Day” prompted a snarky comment from a lady I had never met and didn’t even have children in our district: “Would have been nice to see every child wearing a cape even if they couldn’t afford it. Making every child feel important should be your objective”.  That was the turning point in my “be the better person” mentality. Why should I have to sit idly by and watch parents publicly deride the positive things we were doing? Why was it ok to post slanderous and defamatory statements without thought or care for the consequences? Why were misconceptions allowed to persist? With a quick explanation and approval from my principal, I replied that some students didn’t want to be photographed, chose not to dress up, or made their own capes in our MakerSpace.  I also politely pointed out her insinuation that we intentionally left students out was inaccurate and unfair.

I’m aware that we can’t please everyone all the time and people may not like me: that’s life.  However, I don’t believe teachers need to accept public defamation and slander. So I drove back to school, called that parent who accused me of lying about her child’s injury, and respectfully told her the facts about the situation…and that I didn’t appreciate being called a liar in a public social media post.  I should be able to set the record straight, as should any teacher in the same situation. Social media is a powerful tool for sharing information, allowing families to be more involved in a child’s activities and education while promoting positive interactions and engagement. But when people use it as a free-for-all to grumble, whine, moan, and express dissatisfaction without going through the proper channels of communication with respect and courtesy, as a school would do for them, all they do is foster misperception, misinformation, and disrespect towards the people working hardest for their children. 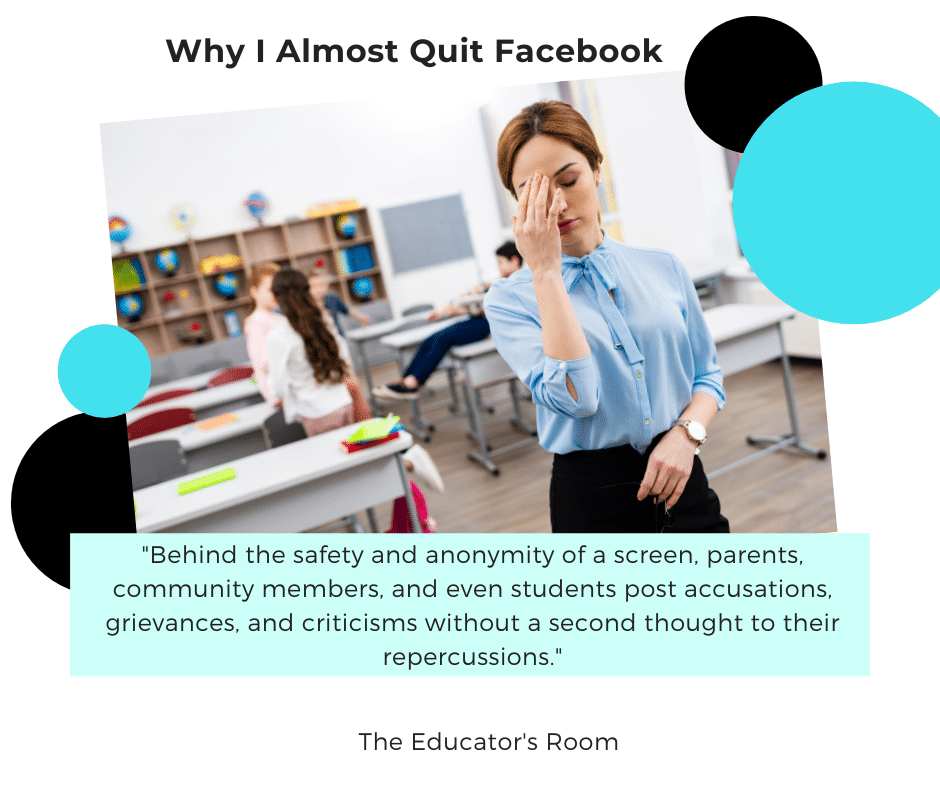