The following is the first piece of a four-part series entitled “TeacherEdprenur” and will follow the journey of how a simple idea about teaching became the subject of a new book, The Secrets of Timeless Teachers: Instruction that Works in Every Generation, published by Rowman & Littlefield next month (May 2016).

“It is always a writer’s duty to make the world better.” -- Samuel Johnson

Some artists and writers are bottomless wells of inspiration.

Mozart composed three symphonies—his final three, in fact—in one mystifying summer of almost-divine fecundity in 1788. Starting in the summer of 1665 a student named Isaac Newton who had been, by all accounts, fantastically average, suddenly formulated theories on motion, gravitation, and calculus sitting in a cottage by himself. Anthony Trollope dazzled the Victorian Era with an endless spigot of creative storytelling. Samuel Johnson would write in “torrential” sessions of creativity that seem to mere mortals to border on the supernatural.

I marvel at the splendor of other people’s genius and the prodigiousness of their output. The more I read and the longer I live the more certain I am that if there is membership in a pantheon of imminence I do not have a claim to engage in even a peripheral dalliance with its members.

But that doesn’t mean I don’t have a good idea every now and then. Even meager minds can occasionally stumble upon promenades of purpose or avenues of inspiration. I wish I could claim a brainy genesis in the midst of a twilight jog or explain my insight’s birth in terms of paralleling the bright mental light of a canonical book.

No exercise or Plato here, I’m sorry to report.

Just a simple conversation with a good friend while standing in a long line for a smoothie. I am not sure how impressed Johnson, Newton, or Mozart would be.

But the truth is the truth. Sometimes insight arrives in a veneer of the banal.

Ask any veteran teacher if the newest teaching fads or trends of instruction act as genuine catalyst of pedagogic transformation. Or, do great teachers—and poor teachers for that matter—retain their status despite the external fixtures of reform that are forever dizzying the education world with its demands and claims of ubiquitous “improvement?”

Yes, standing in line for a smoothie in the middle of the work week my friend and I commiserated on the fact that the teachers who inspired and uplifted us, the teachers who punched our tickets to a richer symphony of life, the men and women who were portals to a higher life of the mind and to schemes of noble action, seemed to share the same battery of gallant classroom behavior.

We hypothesized that our best teachers would have been effective in different classrooms, in different eras, and teaching virtually any student population. There are a great many monikers that are useful when describing effective teaching yet what we had in mind was something more grandiose, filled with the stuff of both reverence and inspiration.

Our best teachers seemed to personify tradition more than trendiness, memory more than imagination. Their fiber never changed, no matter what the trend of the moment seemed to be.

And there it was. My friend continued to stare forward and uttered the phrase that would inspire and occupy the next three years of my life: our best teachers all participate in TIMELESS TEACHING.

Survey the landscape of history and littered throughout every era are men and women who have been stirred to great heights by their teachers—Alexander The Great acknowledging his debt to Aristotle or even the Catholic Church’s first anti-Christ, Nero, recognizing the hope of his teacher, the great Stoic philosopher Seneca.

As I write in the Introduction of my book The Secrets of Timeless Teachers: Instruction that Works in Every Generation: “One can easily imagine Socrates holding court in an upper-division philosophy seminar at a modern Ivy League university. Jaime Escalante would thrive no matter the era he found himself in—teaching to the common core, reviewing for outcome-based learning, or pushing for cultural literacy.”

In an era in which 1.6 million teachers stand on the cusp of retirement, 62% of new teachers report feeling underprepared, and 2,000 teacher preparation programs face the daunting prospect of preparing a new generation of teachers to thrive in an increasingly difficult and hostile work environment, perhaps the best way to move forward is by looking backwards.

The deep and penetrating secret about modern teaching is that there is no secret: the habits and methods of effective teaching have always been known. Timeless teaching is rooted in an essential and universal humanity unmoored from notions of what is vogue or avant-garde. The question for members of the educational profession is what are these timeless methods? How do new teachers embody them in their own, unique way? And most importantly, why are they necessary if one is to make an impact in the life of a young person?

Writers heartily disagree about what ought to motivate a writer to write. Bettering the world? Entertaining and educating the literary masses, perhaps?

For me, this book was conceived in the same spirit of passionate classroom aspiration, hoping, working, believing that anything that can help even a single child live a better life is a victory to be savored. Timeless teachers certainly believe that magic exists in the world. But it isn’t found at Disneyland or in the North Pole. 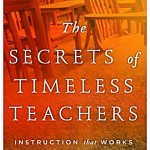 Respect in the Classroom: Earned, Not Expected
« Mini Thought Bubble on Performance Assessments
Ethics in Education... Do We Still Have Them? »