This is a cross-post from EdGator.com.

If there was ever a time when public education needed defenders, it's now. If there was a day when teachers needed support, it's today.

The great American experiment of a free public education for all children—rich and poor, black and white, fluent y todavia aprendiendo, children like yours and mine—is under attack, but this experiment is safe with us. Texas public schools will still be here for our grandchildren's children, if only because you and I will redouble our efforts to defend them from the whims of politicians and tycoons.

Some people love to point to our highest-funded schools and say "Look how much we spend!" then point to our lowest-funded schools in order to say "Look how poorly they perform." It's an effective rhetorical trick that fools the mistrustful, but the truth is that when Texas distributes educational resources inequitably, average spending means nothing. Our average spending doesn’t enlighten: it obfuscates, it hides our unjustifiable spending gaps.

Public education must not take the blame for this relentless inequity that has been a hallmark of Texas education for too long, for our nationwide sin of concentrating have-nots in one class of schools and concentrating our dollars disproportionately in another. Teachers didn't create inequity; politicians did. Teachers are working hard to overcome the academic corrosion of statutory unfairness.

Kids don't need to find a way out of failing schools—love needs to find a way in! Adequate school funding needs to make its way out of our tree-lined suburbs where our schools are succeeding and shower its multi-generational blessings on less fortunate children in zip codes where property values are limited but children's potential is not.

See, I don't object to accountability; I object passionately to our habit of gleefully marshalling accountability for the condemnation of poor instruction and then cynically holding it back from condemning our unjust funding mechanics.

I choose to believe that justice is not yet dead in Texas. I believe that our pride and our faith in a just Heaven above will not let us much longer tolerate unequal treatment of beautiful children with futures before them that need nothing more than a guarantee from brave Texans that more promising tomorrows for them will see the light day.

Now is not the time for the fake, cheap justice of school vouchers. Now is the time for the genuine justice of adequately and equitably funding the public schools in our toughest neighborhoods and our poorest farm towns—schools owned by Texas, operated by local, democratically-elected officials in the name of Texas. Now is the time to make sure these beacons of the Lone Star spirit shine brightly, even in the most forlorn corners of our state. Now is the time to keep the promises we made in our constitution, promises to every Texan, red and yellow, black and white. They ARE precious, they ARE equally created and wondrously formed, and these children deserve nothing less than an adequate investment in their potential. The state of Texas and its leaders must follow the example of our Maker and shower all children with a love that does not account for who their parents are or what side of the tracks they're from.

It's been said that the character of a people is shown best in how they treat their children. The public school in the inner city is the clearest snapshot there is of who we are as Texans. Will we invest in the needy as much as or more than we invest in those who come from plenty? The disheartening answer so far during my lifetime has been a resounding "No, we don't have it in us." Session after session, our leaders flail and ultimately punt on dealing with the wildfire of inequity that consumes thousands of children every year, the fire that is continually burning, continually turning futures to ash. Bad teachers aren't the culprit that is destroying the fabric of Texas society; indefensible policy is. And it is in our power to stop it.

We need balm in our slums, along our border, and in our fading farm towns; but the balm isn't free. Yet every time we speak of need, the reply is, "Throwing money at the problem won't help." Well, neither will taking money away from the problem. (And if money doesn't help, then why are we giving tax breaks to job creators?) The tragic thing is we throw less money at our problem schools than we do at the gleaming exemplars in our suburbs. Sadly, this disingenuous philosophy has led the most hard-hearted among us to conclude that if money doesn’t matter, then neither do fairness and equity. Money doesn’t matter, they seem to believe, so why not let wealthy Texans have more of it in their public schools?

Because it’s morally wrong, that’s why, and because it harms our state's future by forming an intergenerational army of the cheaper-educated and less-well-prepared.

"Throwing money," they sneer, as if these beautiful children are beggars kneeling in the street asking for a pittance. The politicians need to understand that we, the regular Texans who raise and educate our kids here, don't want anyone to throw their precious money at anything. We want them—want all of us together as Texans—to invest. Invest in children. Invest in their futures, because their future is OUR future. Invest, politician, like the people of Texas invested in you, when they paid for your education back before it was trendy to despise schoolteachers. I know you are scared to tell your supporters hard truths like 'you get what you pay for' in education. I know you are scared not to sing the lobbyist-approved canticles from the orthodox hymnbook  of disinvestment in people.

But if you don't maintain the tractor, it breaks down.

The future of Texas demands the balm of a quality education for all children. Paying a reasonable amount of taxes in order to educate other people’s children is my glad patriotic duty; it is my happy repayment to a state that has been good to me, my willing investment in its bright tomorrows.

For two years a growing army of regular people have fought against a Trojan horse of testing-and-labeling, fought against the weaponized data of children parsed primarily to erode people's faith in public education, assembled in the harshest light possible to prime the pump in an effort to convert a public service into a lucrative private enterprise. This system has worked poorly for improving schools, but it has worked quite well for its true, diabolical purpose.

But in Texas some are finally fighting against the pretend science of accountability; fighting and winning. They will continue their fight, I predict. They will reject gimmicks; they will throw out the money changers from our temples of learning: they will chase away the test proliferators and accountability finaglers. They will tell them to take their disingenuous numbers games and their data-driven destruction back to Enron.

Today’s education defenders have claimed the proud mantle of Mirabeau B. Lamar and are even now telling the politicians loudly and constantly that Texas demands a free, high-quality public education for ALL the children in this state.

These proud and loud Texans were heard when they raised a hue and cry and called and spoke and wrote about testing over the past two years. Maybe they’ll also be heard when they say that when there's a school that's failing, the answer is not to walk away from it. The answer is to rush toward it, to race in with master teachers and administrators and programs and resources, not with reams of paperwork and the ‘crack of a distant whip.’ Rush in with healers inside and outside the school. Texas should view a school with low test scores not simplistically as an indictment of a teaching staff but rather as a symptom of a community in crisis. A struggling school is the outward sign of our undiagnosed social trauma. What better early warning system do we have that something has gone wrong, that families and children are struggling, than a troubled school? We should respond with overwhelming support, not overwhelming blame.

We shouldn’t tout shiny lifeboats of choice for 5% of our kids while the masses sink in public schools we've opted not to support equitably.

We should confess here and now that we have funded certain schools—the schools of our poor, to be honest, where common-sense tells us we should be investing more—with less money for many, many years. We've reflexively blamed our funding unfairness on the imperfection of property taxes instead of on these callouses on our hearts. The truth is that we could have funded these schools equitably at any time, and we chose not to. We chose instead to threaten them with labels like ‘low-performing.’ Based on our sad tradition of blatant scholastic injustice, we are the ones who deserve an unkind label. A politician should never get away with underfunding a school, then calling it low-performing, and then giving it away. This pattern is a still photo of a state running away from its constitutional obligations. We must not allow today's schemers to break our forefather's promises.

This product of our forefather's wisdom, generosity, and courage—schools owned and operated by local communities, and open to children of all colors and all creeds—must not wither on our watch.

This life may tear us here in Texas in two, as our conservative roots grow deep in the ground and make us strong and resolute, and our progressive branches reach up to the heavens and make us tender and hopeful. Let us be both, demanding rigor but not forgetting relationships; expecting achievement, but not sacrificing community in order to get it. Our Friday night lights and our hundred year old school mascots are touchstones of community; they must be defended from the bulldozers of efficiency that have been loosed by ambitious politicians.

Finally, let us admit once and for all that the unmentionable favoritism behind Target Revenue's unequal treatment of God's children is offensive to Him. If we don't confront this blatant inequity in our lifetimes, it will surely mar the way we're remembered in our grandchildren's history books.

If you enjoyed reading this article by John Kuhn, don't forget to register for our annual conference where he will be the Keynote Speaker!

In Texas, Progress; But the Fight Continues

Assessing the Damage: What students should know about tests like Smarter Balanced 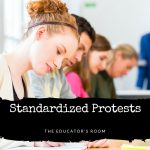