Recently, Jake Miller and I wrote two articles that were simultaneously published, entitled "What Frustrates Me About Non-Public Schools" and "What Bothers Me About Public Schools," respectively.   Many comments were made on both of these articles, the theme of most being in agreement with a majority of the issues listed in both arenas.

My question to our readers is: If there are so many teachers who agree that a change needs to be made, how can we go about seriously making that change?

I had no qualms at all about writing my end, seeing as how I kissed the public school, and accredited private school for that matter, good-bye nine years ago and started my own school. Granted I was in a very blessed position to be able to do that, and I know that a majority of teachers either don’t have the resources readily available or keep running into red tape with an idea such as this, but the fact still remains that we are crying for a change.

So what needs to be done?

We can’t go to our principals because they are either fighting the same battle we are and not getting anywhere, or they are so politically minded that they don’t want to get their hands dirty.

We can go to our unions, if unions are available, but there are no guarantees that the union will be 100% on our sides. Unions are either all in or all out and are more interested in PR than anything. If they are all in on helping teachers try to establish a change usually politics gets in the way, and, well, we all know how that pans out.

It seems as if it does no good to go to legislature anymore. After all lobbyists, representatives and senators are playing a game where the children will always be the losers. They may talk a good talk, and might even throw a bill out there. But we all know that when it comes to actually taking action, most are back pedaling as quickly as possible and that bills get rewritten so many times that they eventually lose their meaning.

So where do we go and to whom do we need to speak with? How do we get the non-classroom folks removed from making classroom decisions? How do we convince not only the school administration and congress that education is a valuable resource and a true privilege, but also our children, school families, other teachers and principals who are sick of school and all it stands for?
I feel like we are stuck in George Orwell’s novel 1989 where Big Brother is hovering over us, daring us to take a stand, and most of us either don’t know what to do or are afraid to act on what we know needs to be done. Teachers are being put in very precarious positions of the possibility of losing their jobs if they are deemed to be stepping out of line, or not ‘making the grade’.  There were several comments made about school systems in other countries doing well. One reader even said that we are comparing “apples to oranges” because other countries have a “want-to” attitude about education whereas the United States has an “I can do it better” attitude, going back to the family unit. Another reader says that the entire “public school system should be nuked” and that we should just start over.

So where do we start?

I believe the only place we can start is with the kids we have. Figuring out how to instill the value of learning into the hearts and minds of our children will allow those values to be practiced and passed on to their families, which in turn will trickle out to everyone else who is involved in creating all of the obscene ‘requirements’ that are being presented to apparently all teachers in the United States.

Leader and businessman John Porter said, “People underestimate their capacity for change. There is never a right time to do a difficult thing.”

I don’t know about you, but I don’t want to fall into the category of underestimating myself and I sure don’t shirk away from doing difficult things. After all, I AM a teacher. 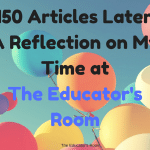 150 Articles Later: A Reflection on My Time at The Educator's Room
« Being a Waitress Was Real Teacher Training
The Unemployed Teacher: Life After High School »