The association of midterm exams with freezing is both literal (I teach in the Northeast) and figurative  (many students “freeze up” during an exam), so at the end of this semester, I took one of the writing standards from the Common Core State Standards  hoping at the very least to stop the “freeze” in the classroom during the exam. Instead of a multiple choice exam with essay questions, I prepared my 12th grade students to write an inquiry paper that would be due the morning of the exam. Yes, even those seniors who had repeatedly assured me that they will never go to college would be tasked with a three to five page paper academic paper that touched on the material that we had read over the course of the semester.

The Common Core State Standard I had in mind was ELA-Literacy Standard W.11-12.7:

Conduct short as well as more sustained research projects to answer a question (including a self-generated question) or solve a problem; narrow or broaden the inquiry when appropriate; synthesize multiple sources on the subject, demonstrating understanding of the subject under investigation.

I admit, the draw for me was the “self-generated question”. We had started the “Hero or Monster” English elective brainstorming the following questions:

We read about monsters in Louis Stevenson’s  Dr. Jekyll and Mr. Hyde and Mary Shelley’s Frankenstein. We read excerpts from Milton’s  Paradise Lost, and we studied the monsters of mythology (Cyclops, Widiego, Fenris, Leviathan).

We read about heroes in the Iliad and in Roger Rosenblatt’s essay The Man in the Water. We looked at Joseph Campbell’s study of The Hero’s Journey, and we created our own superheroes. Students also read an independent book and determined the hero (or anti-hero) in that text. Finally, we used current events to discuss the monsters and heroes in everyday life.

As the quarter came to a close,  each student had to come up with a “self-generated” question. I was happy to see how these texts had served to inform their line of inquiry. Questions included:

The students had two weeks to frame their questions and find evidence that would support their positions. Our “Bring Your Own Digital Device” (BYOD) policy was an important part of the organization and writing of the paper. Students had access to e-texts, and they had links to sources or discussions that we had placed on the class wiki during the semester. I created a Google doc folder and their papers were available for peer editing or for my comments as they worked. One night, I popped in on a few papers to see their progress. As I was leaving comments on one paper,  I saw the following text appear, “Mrs. Bennett, you are on my paper as I am writing….this is creeping me out.”  Creeping them out or not, I was able to provide guidance as they incorporated citations from the texts we had read in class into their arguments.

I am pleased to write that my gambit for this midterm exam worked. The papers are in, and many exceeded my expectations, proving that the writing standard 7 for grades 11 and 12 that requires a self-generated question is appropriate for this grade level.The self-generated question kept them more engaged because this was their inquiry, and as they wrote,  they came to conclusions that they incorporated into their papers:

Throughout the course of writing this paper, I have come to a surprising realization. It has come to my attention that the heroes that we idolize and fawn over (Hector, Achilles, etc.) are not always as heroic as the everyday, ordinary people who rise to the occasion when chaos ensues.

When Hector went into battle in the Iliad in ancient times, he may have had the same thought as the “Man in the Water” in 1982, the thought that “I might die doing this.” That thought did not stop either of them, and both men are still talked about; they are held high and admired. Time does not change our appreciation of heroes.

Some of these true monsters, (Satan of Paradise Lost and Victor of Frankenstein) have used their cunning ways to confuse or deceive the reader so they cannot be seen as the monsters they are.

The inquiry paper, which does permit the use of the pronoun “I”, has been a much easier way to teach academic research and improve a student’s understanding of an author’s intent. Furthermore, the research students included in their papers reflected a wide range of texts; papers were longer, and the evidence was organized according to information rather than the ubiquitous five-paragraph framework.  More than one student remarked how their fingers seemed to know what to write; more than one told me how the inquiry gave them ideas they found surprising.

While I may not yet know the impact of all the standards from the Common Core, I will state unequivocally that the self-generated question allowed me to successfully measure what students learned about heroes and monsters in both literature and in real-life. Correcting these papers has been less of an “ARRRG!” (insert monster voice) and more of a “Hurray!” (insert heroic cheer!). 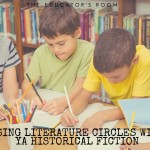 Using Literature Circles with YA Historical Fiction
« What Really Matters for Students: A Review of "How Children Succeed: Grit, Curiosity, and the Hidden Power of Character"
Courage to Teach—Reflecting on Paradox in Teaching »