In the many years I've been teaching, I've often wished that I could just have a group of students who smilingly followed my every instruction.  But beyond instruction, one of my biggest goals as a teacher was to get my students to think for themselves. However, it was difficult to reflect that goal in my grading systems.  The Grade Game was one of the parts of teaching that was always a challenge.

Examples: The boy who never read anything that I assigned, but would come in every day and pull his own choice off the shelf and read silently until the bell (no matter what the rest of the class was doing).  The student who challenged everything we did in class, asking why and forcing me to come up with a good explanation (even if it took a few days of thinking).   The girl who never completed her research paper or reading logs on time, but wrote one of the most original and creative personal essays that I have ever read. These students didn’t ever get grades that reflected their potential or their intelligence or curiosity. These are also some of my favorite students.

On the other hand, there was the girl who rewrote all of her class notes so that they wouldn’t have any cross-outs and refused to revise her writing ever.  Or the boy who read every page of assigned reading but didn’t like a single book we read in class.  Or the girl who cheated her way through every homework quiz, smiling politely through it all.

This second group are the kids who are usually considered to be doing well—they were at the honors banquet, they are going to competitive colleges, their pictures were featured in the school newspaper on a regular basis, and they were definitely seen as part of the popular group.  But they had lost all joy or excitement for learning.

They were sludging through to get the grades to go to college to get a good job and stay perfectly in the system. They were good at playing the game, and they were winning at the game, and they might not have realized how miserable they were.  They didn’t see school as a place to learn or explore or discover new things.  It was the next rung on the ladder that they would slowly climb for the rest of their lives.

But in a system that depends on grades for motivation, is it even possible to create more of the first group and less of the second?  If I have twenty five students in a class and they are all doing their own thing, am I even teaching?

I admit to using grades to motivate students, especially that second group.  And I admit that students in that first group usually got bad grades.  I tried to give them all the encouragement that I could, but I also worked in the system, and I was a part of the system, and I continued the practices of that system.

Now I am not in the classroom any more.  After seventeen years of teaching, my husband and I had our midlife crises at the same time, and we packed everything up to move to an ecovillage in rural Missouri.  We even left in the middle of the school year. But I’m still writing about teaching—now in the role of an entrepreneur.  So I am reading about teaching more than ever before. And I’m starting to think about what I wish I could change about the way that I taught - and one of those things is definitely building a grading system based on other factors than a final product. 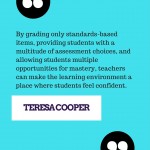 Stop Grading Everything! On Grading What Matters 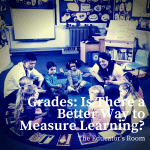 Grades: Is There a Better Way to Measure Learning?

Using Booktalks to Create a Community of Readers 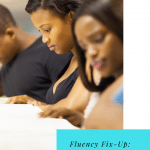