I remember having a romanticized view of teaching while I was in college.  Though I can attribute some of this to a few overly idealistic professors, I mostly blame the movies.  It was probably one week into student teaching when I came to the painful realization that I did not have the ability to magically transform a room of at-risk students into brilliant, successful writers.  Where was Michelle Pfeiffer when I learned that there were some students that I could not reach? Where was Edward James Olmos when I learned that there were some problems I could not solve? It wasn't the first time, and it won’t be the last, but Hollywood let me down.  Hard.  Now, four years into the teaching profession, I have a confession to make: I hate movies about teachers.

This phenomenon, like many of my psychological woes, has its roots deeply entrenched into my adolescence.  I worked in the mall—at a record store chain that doesn't exist anymore.  While I was thus employed, a film called Empire Records began circulating throughout my group of friends.  They were completely enamored with the Gen-X cast, the witty banter and the apparently hip soundtrack.  Despite Liv Tyler and her plaid miniskirt, I was annoyed.  Where were the rude customers? Who had to alphabetize the R&B section? How did these people afford their own place on minimum wage? I soon realized that this film was annoying because I worked at a record store.  I was painfully, frustratingly aware of the fact that the reality of working in a record store was nothing like the counter culture fantasy of Empire Records.

Later in my life, I would read an essay called “This is Emo” by Chuck Klosterman, which would further enunciate my distaste of teacher movies.  He theorizes that the reason actual relationships fail is because people are too preoccupied with somehow achieving the “fake love” which is mass-produced in Hollywood films.  Basically, he claims that women don’t want him, they want Lloyd Dobler from Say Anything.  The problem with this paradigm is, obviously, that Lloyd Dobler from Say Anything doesn’t exist.  The same can be said of movies about teachers.  Even though Erin Gruwell is a real person—and I mean no disrespect to her—Hilary Swank’s character in Freedom Writers is the product of a Hollywood machine.  People see Freedom Writers and that’s what they want out of their public educators.  Though I understand this desire, I am also aware of the realities that public educators face.

Documentary films are not immune to this skewed version of reality.  For example, the controversial documentary, Waiting for Superman, pinned the flaws of the American public school system on teacher unions and apathetic administrators.  Again, to anyone working in public education, the problem is not that easy to solve.  And let’s not overlook the fact that Waiting for Superman was produced by Walden Media, whose president has donated large sums of money to back educational initiatives like school vouchers.

Many teachers would be glad to have a day that had the polish and luster of a Hollywood script.  It would be great to have each line of dialogue mapped out, each minuscule event pre-planned, and, best of all, a happy ending.  But this is not the case.  Teachers work with limited resources, unscheduled student transfers, emergency drills—the list of variables present in any teacher’s workday is staggering.  That being said, watching a movie about a teacher whose big victory is making a difference with one class is almost insulting to those who know that one breakthrough with one class of students is not good enough.  Teachers know that they must perform these miracles for the next student, the next class period, and the next year of students.

I suppose my biggest disappointment with movies about teachers lies with the fact that a filmmaker will never be able to accurately capture education’s tragically beautiful mixture of hope within hopelessness, and when they try, the whole experience is cheapened somehow.  The teaching experience should not be cheapened by films that tout the words “based on a true story” alongside the title.  Let’s not forget that The Texas Chainsaw Massacre was also based on a true story.

Teachers, how do you feel about movies about teachers? 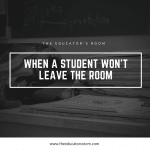