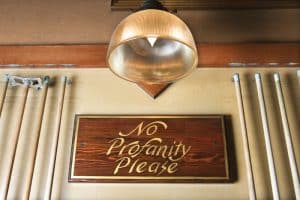 When I was a high school freshman many years ago, I once told a fellow student in a fit of annoyance to “stop bitching” about something. My teacher glanced over and with a stone-cold gaze uttered a single, one-word commandment: out!

I remember sitting on the stairs outside her classroom in a submissive hunch of genuine repentance. I was embarrassed. I knew better. I had been scolded in front of my peers. I liked and respected my teacher and knew I had disappointed her. My parents were going to be annoyed.  It’s not that I didn’t use salty language as a high school student; it’s that I knew it didn’t belong in the classroom (or the school, for that matter).

In my two decades as a high school teacher, students have slipped up in class more times than I can count. And if teachers who stand in front of fellow human beings for five hours a day, one-hundred eighty days a year, are being completely honest with themselves, they will probably admit to wishing they could occasionally take back an utterance or two every now and then. Few of us are linguistic cherubs.

But in the last few years, the occasional blip of inadvertent, ludic profanity in students has become a roaring crescendo in classrooms across America, transitioning from innocent moments of unintended explicitness to a ubiquitous and non-apologetic din of continual vulgarity. Statistics are scarce on the topic, but anecdotal musings from the corps of American teachers who have been duned with profanity tell a story that is both halting in its abundance and disheartening in its content.

They tell of a disturbing but consistent trend in schools across the land: Walk across campus. Walk through a hallway. Sit in the stands during a football or basketball campus. Sit behind students at a school assembly. It’s not that cursing, vulgarity, or profanity is new to young people. It is that they don’t feel the need to be restrained in their use of such colorful language. They aren’t embarrassed. They don’t stigmatize the language they use. When I kindly ask them to stop using inappropriate language they somehow make ME, the teacher and adult, feel ridiculous for even bringing it up.

But most alarming of all, there is no recognition in our young people that the forms of expression we use correlate to the character of the people we are. Click To Tweet

I know, I know. Cursing doesn’t make someone a bad person. True. But not respecting the rules of the adults around you is a character defect. It’s called defiance. Not acknowledging that others—even small children—have to listen to you and your use of inane profanity is also a defect. It’s called selfishness. Thwarting the well-known and established customs, conventions, and norms of your community without good cause and with loud braggadocio is not artistically edgy or socially progressive. It’s just vulgarity for the sake of vulgarity.

It is quite fashionable to extol modern educators to “empathize” and understand the background of their students’ lives, i.e. “get curious, not furious.” And this is well and good. Students who live in neighborhoods and homes where cursing and profanity are ubiquitous often learn to express themselves in a similar manner. Realizing this is essential and adjusting punishment policies around this reality is also appropriate. “Good riddance,” I say, to policies that once expelled and suspended students for using course language.

But it says something very powerful and dark about our educational culture when we (and I include myself in this) often go to the opposite extreme, abandoning standards of decency altogether, when we tolerate students screaming f-bombs with abandon or shrug when they utter things beyond any scrape of social acceptability. Walking down a high school campus these days one wonders what ever happened to words like “gentleman” or “lady?” They seem sadly outdated and passé, relics of a bygone era when “right” and “wrong” didn’t require quotation marks and were even spelled using capital letters: Right and Wrong. When did we abandon moral aspiration and character formation as ingredients—perhaps the most important ingredients—as practitioners of education?

Indeed, this phenomenon actually begs a deeper and more profound question to teachers and administrators about politics, community, and the purpose of education itself?

Thomas Hobbes famously coined the phrase “small morals” to describe the habits that must exist in social settings in order for civilization to stay “civilized.” When we rationalize poor behavior and tolerate it to the point of indifference, there is a real political and personal price to be paid. We see this in our schools and in the culture writ large. It used to be a headline if a national politician was caught using profanity. Now it hardly merits a mention. Cursing in line at the supermarket used to evoke a stare or two from fellow shoppers.

On a personal level, education is about empowering young people to become the best version of themselves, to use the knowledge, habits, and traits of an educated mind to become a finer version of their raw, infantile selves. Enforcing rules and asking students to reach standards is not oppressive nor is it a form of institutional tyranny—it is a part of a broader process of educating young people on how to exist and thrive within a community. Being human means conversing, sharing, and interacting with others. A meaningful education cannot be indifferent to “how” this sharing, conversing, and interacting occurs. Indeed, Plato and Aristotle argued that human fulfillment and “the good life” were rooted in social engagement and interaction within the polis, that isolation is both miserable and stifling to human development.

We do not excuse violence from citizens who come from violent backgrounds. We do not excuse cheating from students who come from families exerting enormous pressure on their children to succeed. We confuse marginalizing students with the more important task of marginalizing the destructive behavior and expressions they utilize to make their thoughts and intentions known to those around them.

On a social and political level, it is not defunct Victorian snobbery to insist that students are individuals in possession of agency and potentiality, capable of acting, thinking, and yes, speaking in a way that encourages the better impulses within them. We want our students to communicate in a way so that they may someday convince, charm, explain, debate, and engage fellow citizens. When we do not ask, require, and ultimately correct our students we make a damaging assumption about them, that they are biological projectiles of a fractured and broken background incapable of learning the habits that are necessary to flourish in their school communities and beyond. Standards do not exist in a moral vacuum; they are not tools of power wielded to arbitrarily oppress or judge. They exist because they are the best and most enterprising path towards genuine fulfillment in life. They do not care what color a student is, who their parents are, or the size of one's bank account.

Many of us in the trenches of the American school system bemoan this trend but also find ourselves eager to accept the challenge. This acceptance requires that we focus on the little things as well. After all, it is the celebration and mastery of little things that forge the mightiest thing of all: character. 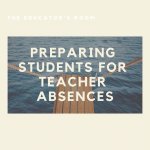 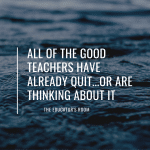 All Of The Good Teachers Have Already Quit...Or Are Thinking About It
« Teacher Solidarity Matters
2018...Helping Teachers Have the Best Year Ever »