In the third day of hearings over mass school closures, Chicago Public Schools' budget director Ginger Ostro told a federal judge that the closure of more than 50 schools promulgated by Mayor Rahm Emanuel and opposed by the Chicago Teachers' Union were not the result of race. Ms. Ostro claimed that the closures (and layoff of more than 2,000 teachers) was budgetary, and not based upon neighborhoods or racial factors. Parents and the teachers union stressed that the closures will force students to walk into the path of hostile gang territory in Chicago.

Educational Impact: Education has, more than any other color, become a green issue. It seems primarily black and white, poor and wealthy, and urban and rural schools are all financially pressed, as are their teachers. However, urban schools in financially-distressed (and primarily black) districts are facing the toughest of the burden, especially in loss of federal and state dollars. This graphic from Ed Week certainly highlights the difficulties Chicago has shared with Philadelphia and New York.[/fusion_builder_column][/fusion_builder_row][/fusion_builder_container] 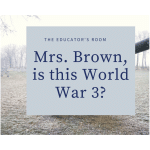 Educators React to the March for Our Lives
« Flipping My Classroom With Edmodo
Education’s Ancient Texts: The Rosetta Stone and Standardized Test Data »