On this particular day in my classroom, you would have found a service dog standing faithfully by their owner as she explained how her dog detected her insulin levels.  Or you might notice a laptop flashing intricate patterns of code while a robot zoomed up to you carrying a piece of candy.  In another part of the room, you could listen to a young lady explain how she designed, molded, and welded a beautiful shield for an upcoming Renaissance festival.  Finally, during the yearly talent show, another group of students sets up for their performance of “I’m Still Standing”.  Their leader, a very charismatic young man, introduced the Glee Club as he’s dubbed them stating they all are part of a semester’s long project called Genius Hour that the amazing Mrs. Winter allowed them to do.

Genius Hour this is indeed a semester’s long project, my friend and fellow Pre-AP teacher began a few years ago for enrichment as well as research skills required for our scope and sequence.  We both allowed students to research any topic of their choosing, but we had the final approval of their choice within the application process.  I’ve only turned down two proposals from students who had nefarious plans for their project.

What is Genius Hour?

Genius Hour came from Google as an idea that they allow their employees 20% of their time to pursue projects of their own on company time.  We did the same within our class time.  Our assigned library days seemed to be the perfect time to incorporate this, so every other week we allowed class time for students to research their topic.   I always tried to incorporate whatever SE’s (student expectations) for the six weeks into their research.  For example, if it were text structure, I instructed students to find articles in varying structures for the purpose of their lessons.  This also allowed them to have a choice as they found their own article to analyze.

My students learned how to write a proposal, thesis statements, find credible sources, put together a presentation, as well as practice speaking and listening skills.  To me, the biggest takeaway, my students loved this activity because they had complete ownership of their learning. It might be helpful to note that I taught 7th-grade Pre-AP English, so having middle school students become excited about something that required them to read and write is HUGE!  Students would come into class excited and with big smiles on their faces when the Smartboard reflected the day’s agenda,   “Genius Hour Day!”

I have to hold students accountable for their learning and research.  I accomplished it by either conferencing with them as they were working, or having them fill out my Just the Facts handout I created.  This little document just had boxes with various titles:  Cool Fact, Shocking Fact, New Fact, etc.  This also became the base for my conversations with them as well.  Occasionally, a few projects changed focus as a student found their thesis topic was too broad, but this is part of their learning too.  It forced them to narrow down their topic.

I tried to encourage my students to think outside of themselves when contemplating their projects.  How would their project benefit others?  One little partnership of young ladies come to mind with this initiative.  They both had a desire to write and illustrate a children’s book.  They worked together on this idea for the semester and sought out their audience to share their completed book with – the elementary school that fed into our middle school.  The girls pooled their money together and had a professionally made copy of their book printed as well.  Both reached out to the school to ask if they could come read to the students.  I still remember the day they rushed up to me beaming that they would miss class that afternoon because they were going to be at the elementary school with the 1st-grade students!

This was not my only partnership of budding authors/illustrators as another pair decided to make a book for our students in TLC, our classroom with medically fragile or learning challenged students.  They first sought the blessing of the TLC teacher, which she happily gave, and my students began visiting with her students to find out their favorite pets and such.  Their final project became a superhero story where the TLC student’s pets were the heroes.  Both of these alliances made me very proud.

The young man who proposed this idea had lofty ideas of forming a musical group that would perform in nursing homes, schools, and anywhere to bring joy to others.  He soon discovered scheduling in these places became easier said than done, but he retooled his purpose to prepare for the talent show audition at the end of the year.  He didn’t even propose making it into the show, just getting to the tryouts was good enough.  Granted, he did not have his ensemble rehearse in class during Genius Hour day, this was reserved for once a week after school sessions in my room.  He had his own tryouts much like American Idol.  In class, he spent time researching the history of Glee Clubs, song genres, choosing songs, listening to the audio of people auditioning, etc. They did make it to the tryouts, which was their original goal.  Then when they were told they made it through to the show, well imagine about 8 7th grade students whooping and hollering in excitement!  Oh – they also won 1st place in the Talent Show!  My young man, in true performer style, accepted the trophy and thanked everyone for getting them there to this stage, including the “ever-patient Mrs. Winter who allowed us to rehearse in her room – all the time!”  I may have shed a small tear.  This little club continued into the following year under the guidance of a different teacher, but I am still proud of these kiddos for their hard work.

These examples I’ve shared are just snippets of the experiences my students had during the 5 years I held this project.  A few other projects that come to mind have been as follows:

As I said, I never had a student fuss, whine, protest, or drag their feet on Genius Hour day in completing the tasks assigned for this.  I am a firm believer in offering students choice, even in normal assignments meaning I will have two different articles to read for the assignment allowing them to pick.  Of course, I know both have the expectations I want, so it did not matter which they chose, but the students did not know the difference.

In the time of a pandemic

I have no idea why one could not continue offering this option for students during this bizarre time we are in.  It might require more video conferencing with students if you work totally remote, but they could share their screens, provide documentation, or FlipGrid video demonstrating the process if needed.  My friend and I decided to offer the Genius Hour component in the second semester because this gave us the first semester to get to know our students and build a relationship with them.  Also, in the last six weeks, our curriculum focuses heavily on research skills, so it fits in perfectly here as well.  I highly recommend this concept if you want 100% student engagement.  As I mentioned, it is very easy to fit in any of the required lessons you need to teach within six weeks or a quarter.  Who knows what wonderful things your students will produce! 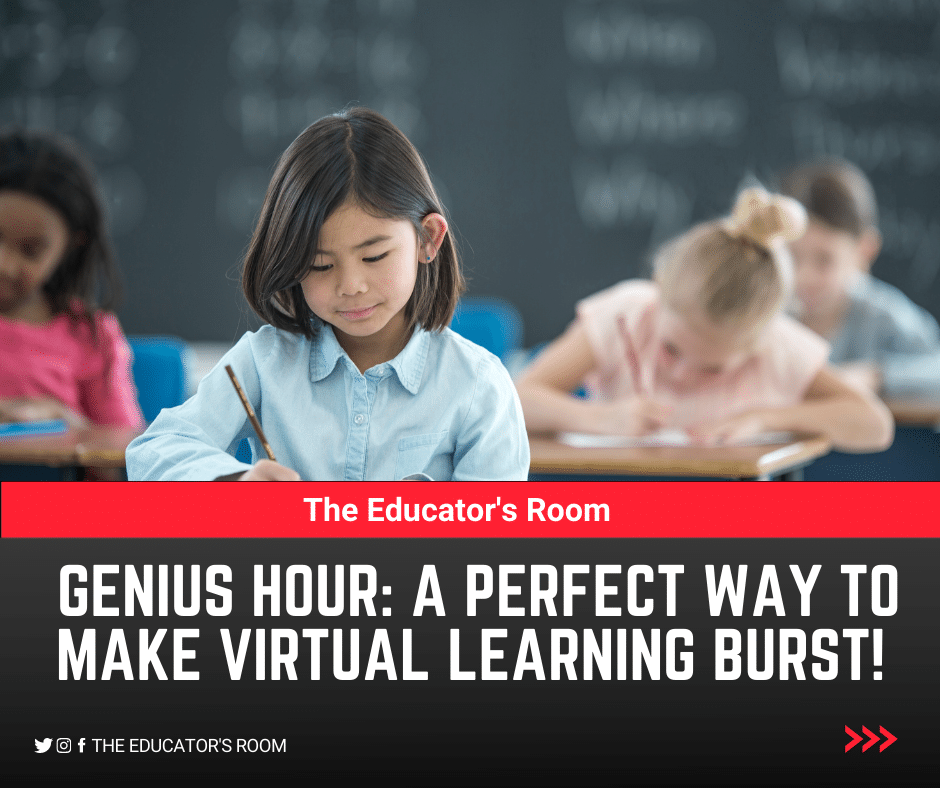 About the Author: Suzy Winter