Of all the national holidays, Labor Day is the most passive. It floats as the first Monday in September. It lacks a symbol, a song or ritual, but maybe that is not so strange for a holiday established to be a collective celebration of rest. Labor Day is set aside to recognize the importance of labor in our lives.

That sentiment was at the heart of a speech recorded by Retired Lt. General Russel L. Honoré for This I Believe, Inc. This I Believe is an “independent, not-for-profit organization that engages youth and adults from all walks of life in writing, sharing, and discussing brief essays about the core values that guide their daily lives.”

Honoré is best known for coordinating military relief efforts for Hurricane Katrina-affected areas across the Gulf Coast and as the 2nd Infantry Division’s commander while stationed in South Korea. Honoré, also known as “The Ragin’ Cajun”, speech was shared on NPR’s Weekend Edition, March 1, 2009.

Work is a Blessing

Honoré’s essay was titled To Work is a Blessing and in it he describes how his father influenced him to see labor differently. His own work experience began in his youth when he had to milk 65 cows twice daily:

I remember complaining to my father and grandfather about having to go milk those cows. My father said, “Ya know, boy, to work is a blessing.”

Honore described how he I looked at those two men, and “had a feeling I had been told something really important, but it took many years before it had sunk in.” As a young man, he joined ROTC to pay for college, and that obligation led to his 37 year career in the Army.

In a visit to Bangladesh in the 80s he explains how he watched a woman breaking bricks with a hammer with a baby strapped to her back. When he asked if a machine would be more efficient and less difficult, an official explained that a machine would put that lady out of work. Honoré then understood:

“Breaking those bricks meant she’d earn enough money to feed herself and her baby that day. And as bad as that woman’s job was, it was enough to keep a small family alive. It reminded me of my father’s words: to work is a blessing.”

His position in the Army took him to multiple countries, where he grew to recognize that people, regardless of where they lived, who lived without jobs were not free. They become “victims  of crime, the ideology of terrorism, poor health, depression, and social unrest.” Instead, he argued that

“People who have jobs can have a home, send their kids to school, develop a sense of pride, contribute to the good of the community, and even help others. When we can work, we’re free. We’re blessed.”

Honoré’s speech is  (561 words); his audio recording of the speech is 4:02 minutes long. The readability level/Grade Level is 6.7; both speech and recording are available on the This I Believe website.

Educators who might want to use this speech with students in grades 6-12 could align their questions to several Common Core State Standards (CCSS) for reading informational texts. Reading informational texts such as this speech help students build a foundation of knowledge in multiple fields. This background knowledge helps them to be better readers in all content areas.

Here are four anchor standards from the CCSS and questions stems for each strand:

RI.9-10.1 Cite strong and thorough textual evidence to support analysis of what the text of this speech says explicitly as well as inferences drawn from the text.

RI.9-10.2 Determine a central idea of a text and analyze its development over the course of Honoré’s speech, including how it emerges and is shaped and refined by specific details; provide an objective summary of the text.

RI.9-10.3 Analyze how Honoré’s unfolds a series of ideas or events, including the order in which the points are made, how they are introduced and developed, and the connections that are drawn between them.

RI.9-10. 4 Determine the meaning of words and phrases as they are used in Honoré’s speech, including figurative, connotative, and technical meanings; analyze the cumulative impact of specific word choices on meaning and tone.

Labor Day may be a passive holiday, but this day is important to recognize the importance of work in every life. Honoré concludes his short speech by saying he has no plans to stop working, restating his belief in his father’s words:

"I believe in the blessing of work.” 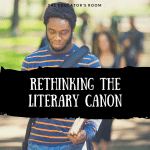 Rethinking the Literary Canon
« Bilingual Education: Good For Everyone... and Dangerous Too
The Petri Dish Is Real: Staying Healthy During the School Year »