Last spring, my 8th grade students were involved in Literature Circles where they read one of six Young Adult Historical Fiction selections. The Literature Circles took about five weeks to complete. Previously, I wrote a series of articles that cover procedures, mini-lessons, and assignments and assessments. One of the major areas I worked on with my 8th graders all year was questioning; we use "I wonder..." statements daily. Because students were already in groups that had lists of shared questions, it felt natural to move the groups from Literature Circles, to Inquiry Groups.

There is a mountain of research out there that supports student-inquiry rather than just covering content that is teacher (or administration)-generated. Inquiry puts the students in charge of their own learning and gets them invested as active learners rather than passive note-takers. I think inquiry works especially well in English classes because our set of standards can be applied to any text, so it's easier for the content to be student-led.

When I taught twelfth grade English, we read Beowulf, Macbeth, and Frankenstein together as a class. With each text, the students generated questions. The last year I taught seniors before switching to eighth grade, students' questions largely surrounded mental health issues. For our final marking period, students did literature circles reading contemporary YA fiction, and again, the questions of mental health came up. Inquiry groups formed and, for their final senior project, groups dove deep into researching mental illnesses, suicide prevention, mental health facilities, etc. We had a presentation day complete with snacks and invited others (teachers and staff) to participate. There were deep discussions and even tears and hugs as students shared personal stories, videos, and statistics.

Students were using higher-level thinking skills rather than just memorizing plot and character traits and regurgitating them for a test. They were looking at themes and connections that all the texts they read had in common and creating something new from what they learned. They were collaborating and participating in something they wanted to know more about.

When I create inquiry-based units, I rely heavily on the work of Stephanie Harvey and Harvey Daniels in their book Comprehension & Collaboration: Inquiry Circles in Action (2009). They outline four stages of inquiry (they have a specific chapter just on Literature Circles, which I am referring to in this article): Immerse, Investigate, Coalesce, and Go Public.

The year I taught seniors, our inquiry groups happened spontaneously. Last year when I did them with eighth graders, it was a planned unit. I placed them in their Literature Circles with the idea that they would for sure have questions since the books were historical fiction from around the globe.

The first two stages--Immerse and Investigate--actually occurred during the Literature Circle time. Students were encouraged to not just keep a record of questions, but to look up some explanations for those questions and to keep a list of questions that came from that research. One group read A Long Walk to Water about the water shortage in the Sudan as well as the true story of one of the Lost Boys. From reading the text the students had many questions spanning from "Where is the Sudan?" to "How many people had to walk long distances to get fresh water?" to even "Why don't people move closer to the fresh water sources?" They had questions about the civil war that drove the main character out of his village. Part of their group time was spent online looking up possible answers to these questions.

Questions like those would shape their heavy research once the book was over, leading into the stage of Coalesce. This is the stage where the groups looked at all their questions and decided on which one would be the big question that ties all their research into one. Many groups naturally chose an action question. For instance the group that read Never Fall Down ended up doing their project on the effects of being a child soldier and what we can do to help. The Coalesce stage is where the heavy research is done that will form the final project.

The final stage is to Go Public. This is where my students presented their research and findings to the class. They gave a summary of the book they read and discussed the questions that came up while reading. Most presentations were not just fact-based, but took the form of a call to action: helping fun clean water projects, donating time and money to mental health care of veterans, the need for more cultural awareness, and so on.

I assess kids in two ways for large-scale projects like this: day-to-day grades and a large end grade.

Each day students meet in their groups, I rotate around the room, plopping myself into a group to listen, ask questions, and confer with the students. Most students like a clear outline of where they are going with a project and some clear check-in dates for when certain things should be done. I found my high school students to be able to set this for themselves and follow it more independently than my middle school students. For eighth grade, I print out a blank calendar and I sit with each group and we talk about what all needs to be done: read the book, do the book assignments, figure out a big questions, gather research, create an end presentation. I help them plan out their due dates as a group, and we both keep a copy of the calendar we created for them. This calendar then becomes my starting place with them throughout the unit when confer with the group and do check ins.

I also give the students a rubric for the end presentation. They have this at the beginning and we constantly revisit it as a whole class and in the small groups. This rubric is usually broken down by the standards that they need to meet (taken from the CCSS) as well as the elements that should be included in a final presentation.  The rubric is not a checklist, however. The goal is not to grade compliance, but student thinking.

While it's a lot of moving and talking and working throughout the project, grading students this way actually saves time for me at the end. I've become so invested in every aspect of their group, that almost everything has been assessed along the way. I am not stuck with a pile of tests or essays that need to be waded through, rather I am free to enjoy and engage in the students' presentations that I have watched form. Beyond a Venn Diagram: Making Movies Work in the ELA Classroom 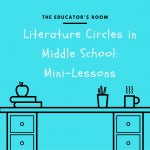