Jonathan Blackstock is a teacher in the Georgia Mountains.

Often, the motivational strategies that well-meaning administrators line up for pre-planning fail to relate to our goals in the fine arts department, but this year, our speaker offered a reason to believe in students and a way to help students believe in themselves.

Marching Off The Map author Tim Elmore spoke to our district faculty meeting during pre-planning to kick off the school year (2019-2020). The majority of his message, like the first five to nine chapters of his book, resembles what I would consider an enlightening sociological study in that his research, at first, seems eye-opening but not necessarily empowering.

The K-12 students we’re teaching today do not draw motivation, comfort, and inspiration in the same way that students of previous generations do.

The research supports this claim.

What’s more is that the current high school students are not Millennials, as is often reported. Millennials, as Dr. Elmore points out, are not our students; they’re our colleagues now. The members of the new generation (Generation Z) prioritize their time differently. They are more prone to stress, require even more visual stimuli to learn, and give up more easily when facing adversity. We see the epitome of the generational difference when we understand that while Millennials texted in abbreviations and lowercase letters, the new generation bypasses all sense of the written text, deferring instead to emojis and gifs (49).

Elmore’s research certainly changes perspectives, but teachers usually want to take that research and apply it so that they can help students improve. Even if, as fine arts teachers, we are not creating future art majors, we do want students to incorporate their creativity into well-developed characters. If all else fails, we want them to become people they can be proud of. While this endeavor has never been simple, modern trends are not making the task any easier. Students today, as Elmore points out, have a more pragmatic moral compass, meaning that they often divide right from wrong according to what they can get away with rather than by a set standard (47-48). Yes, there are exceptions as always, but the overall observation is tough to refute. Having said that, as a teacher, what do we do about this issue? How do we use this to help reach students?

Fortunately, in his final chapters, Elmore offers several suggestions, but probably the most essential is that students have to feel as if they are important. Elmore refers to this suggestion as “The Motivation of Belief” (217). We not only have to make students realize we believe in them, but we also have to be demanding in our requirements. In other words, students have to know we believe in them, and then, they have to find reasons to believe in themselves. Taking the advice further, students need to know that their peers believe in them and that they are part of something more important than test scores, which often simply decide whether the educators have value. Fine arts teachers have a head start in making this connection with students because we already have projects, productions, concerts, and so on that make each of us--students and teachers alike--vital for each other’s success.

A freshman student that I work with found herself in a lot of trouble near the beginning of the year. And for good reason. He had stolen something. He found an envelope full of money on a table and just took it. The student had shown a lot of promise in both our theatre and literary teams, but he also had several issues at home, many of which immediately reminded me of the case studies in Marching Off The Map. When I pulled the student aside, he tried to use those issues as an excuse, explained the tough environment he’d encountered growing up in another state, and ultimately tried to downplay the theft by pointing out that no one’s name was on the envelope. I tried explaining that he knew it didn’t grow there, that he had better sense than to believe this was acceptable, and even that his past did not give him a ticket to do whatever he wanted. None of this mattered.

The shock came when I told him that his friends and I were counting on him and that if he stayed in trouble, he’d have to give up being a part of the team.  The administration, rightfully so, would not put up with this. The student’s entire existence came to a halt.

“What do you mean, I’m important?” I explained that he had potential, that the leaders of our program saw his talent, and that he didn’t need to perform outrageous acts to garner attention.

The student had been scolded, punished, and ignored, but he had never really been made to feel important. Since then, this student has won several group and individual awards in his freshman year and has maintained better grades, his mom says, than he has ever had before.

Dr. Elmore says, “If today’s population of kids is fragile, it’s because we have raised them this way.” The student I am working with needs to find a real moral standard at some point. Absolutely. But until then, we can’t just tell students that they will live by our standards, and we can’t just make or accept excuses for them. They have to believe in themselves, believe that their struggles will benefit them, and if possible, believe that they are a part of a supportive team. 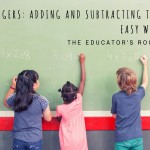 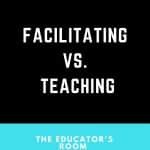 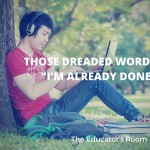 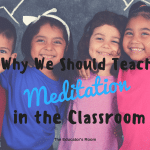 Why We Should Teach Meditation in the Classroom
« You Sound Like My Mom: The Reflections of a Teacher Bear
A New Hippocratic Oath For Teachers »