Editor's Note: Writers Dan McConnell and Jake Miller teamed up to take on two driving buzz words - "deliberate practice" and "professional obligation" - and explore how they're driving teachers to stress.

DAN: Teacher Stress Is Not Blessed

Teacher stress is a very real problem, and without reforms where they are truly needed, that is unlikely to change.The October 7th Atlantic featured an article about the ever-growing amount of stress and unrealistic standards educators are facing these days. The article fits well with some thinking I had been doing, and an idea that Jake had about he and I co-authoring a piece on the continually increasing demands placed on teachers and the disrespect of profession and person that can sometimes come with those demands. The co-authored article idea actually grew out of a Facebook post suggesting that these conditions have led to redefining what deliberate practice in the school setting can mean. When Jake suggested this shared piece I was very interested. I like his style and he’s a history teacher. Neither thing is a “get out of jail free” card but it means a good conversation without having to spend any time in jail at all. If you haven’t yet, you should check out his writing here.

Getting back to the ever-increasing demands on teachers: they are beginning to go far beyond the realm of the academic outcomes educators are publicly measured by, and they further tax the planning time, free time, and family time that already comes too little/less often. This only compounds the pressure educators are feeling as a result of a dehumanizing overemphasis on standardized test score and the labels that have been attached to those scores (e.g. effective/ineffective; successful/failing…). The Atlantic article includes this quote, which I think summarizes the situation well:

“[fusion_builder_container hundred_percent="yes" overflow="visible"][fusion_builder_row][fusion_builder_column type="1_1" background_position="left top" background_color="" border_size="" border_color="" border_style="solid" spacing="yes" background_image="" background_repeat="no-repeat" padding="" margin_top="0px" margin_bottom="0px" class="" id="" animation_type="" animation_speed="0.3" animation_direction="left" hide_on_mobile="no" center_content="no" min_height="none"][T]he system that we have right now in America, which is focusing on test scores and accountability, and has teachers being pulled in so many different directions at once, has got so many different pressures coming from so many different places,” said Mike Anderson, a veteran educator and the author of The Well-Balanced Teacher. “It’s almost like a recipe for making people feel incompetent”

Certainly schools have to “up their game”, considering how students need to be prepared for the times we live in. The social, political, economic and employment landscapes have all changed considerably over the past generation, and educators need to be better empowered and equipped to overcome the societal forces confounding student outcomes. But the most important outcomes are not really test scores, and the most critical student needs are becoming less academic. Child poverty has only increased since the economic crash of 2008, and with poverty comes a whole host of variables that impact learning.

A higher percentage of children live in poverty now than did during the Great Recession, according to a new report from the Annie E. Casey Foundation...“The fact that it’s happening is disturbing on lots of levels,” said Laura Speer, the associate director for policy reform and advocacy at the Casey Foundation, a non-profit based in Baltimore. “Those kids often don’t have the access to the things they need to thrive.” (USA Today, July, 2015)

The changing game - whether it be an increase in students of poverty or new legislation - have added to the expectations of this profession. There’s no doubt that the role of educators has increased. In the past, teachers simply played the role of commander-in-chief-of-classroom and curriculum captain. That is no more. In a past article I wrote about “The Many Hats of the Teacher,” I listed the following roles: Drill sergeant, rabbi / priest, therapist, disciplinarian, singer, scholar, clear, referee, clown, counselor, apologist, philosopher, collaborator, tap dancer, politician, shoulder-to-cry-on, fool, traffic cop, mother-father-brother-sister-uncle-aunt, critic, psychologist, and the last straw.

Indeed, our deliberate attention needs to be placed upon the students' struggling needs. While we’re slightly down from a high of 6 million American special education students in 2004, the pendulum is quickly swinging upwards, with an increase of 100,000 just between 2013 and 2014 (according to EdWeek). Six million special ed students is quite easily within reach.

Because of that, teachers' roles continue to expand. Today we are secretary. We are paper sorter. We are vigilante. We are impromptu entertainers and problem solvers. We are the delegated instead of the delegators. The missives and missions deriving from from the top - from our nation, state, school board, and principal - have worked their way down to our classroom. And we can feel it.

Dan noted in his article “The 4 Challenges of Teaching” that the challenges of time, strategy, civility, and leaving something for home are omnipresent in our everyday lives. They exist in the lives of students, too.

Students are struggling, and we need to be there to help them. But, is “deliberate practice” the way to go?

In her article at The Educator’s Room, Christina Gil writes this about deliberate practice:

Deliberate practice includes getting feedback from an expert and examining mistakes in order to improve from them.   It means learning as you go, not just meaninglessly repeating the same task over and over.

As Jake mentioned in “The Rising Expectations…” section, rising expectations don’t automatically lift all boats (student outcomes). We have spent several years now chewing on inane rhetoric regarding raised bars, “grit and rigor,” and accountability. While it has all led to endless hours of teachers being told they need to be better and even more hours of honing their craft-there needs to be some reflection of how we got to where we are. The year 2004 marked one where that lawmakers worked some amendments to the Individuals with Disabilities Education Act (IDEA) that largely drives deliberate practice in academics in the public school setting today. It is very likely that the high numbers of special education students at that time caused concern for education policymakers and was a financial burden on school districts-especially those struggling to serve high-needs populations. One could argue that these amendments had a positive impact since the number of students receiving special education services initially decreased. But the mechanisms created through those amendments might have actually allowed delays of the identification of student needs more than it promoted improvement in student outcomes.

Consider the initial decrease of students receiving special education services and the following dramatic upswing a few years later. That 2004 language prompted districts to “use a process that determines if the child responds to scientific, research-based intervention" as part of its evaluation procedures for identifying learning disabilities (IDEA, 204, 614[6] B). Along with that was a stipulation that up to 15% of federal special education funds could be used for early intervention services for students prior to their identification as having a learning disability. It sounds well-intended, but the bottom line of the change was a switch in schools from a “discrepancy model” (identifying through testing and other evidence a significant gap between  I.Q./aptitude and academic performance) to a more drawn out Response To Intervention (RTI) model where educators were mandated to track intervention attempts over time to address deficits. When explained, RTI sounds right as an idea:

The interventions at tier 2 and 3 often involve deliberate practice, as it is intended to be: the approach of explicitly and repeatedly performing the component skills needed along a learning path to the overall skill-level desired. Not a bad idea (IDEA...get it?), but while teachers are often grinding their gears trying to address significant individual needs the way a special education teacher should: 1) a classroom of regular education students waits, and 2) students who could benefit from more individualized support are forced to jump through hoops and over RTI tiers. Combined with curriculum and testing that is often developmentally inappropriate, practice, let alone deliberate practice, becomes a challenge for educators.

Tracie Happel, in this article about how much more teachers are expected to do

Every day, part of my job is to remind my students they are beautiful, smart, capable, amazing, creative, and worthy. Every day I work hard to show them the ways they can instead of the ways they can’t. And it’s not right. Our educational system is set-up to show kids what they can’t do. Especially when it comes to testing.

While I love the cognitive science behind deliberate practice and skill acquisition, our professional attention as teachers is often pulled to deliberate practice of skills that fall in the social-emotional arena. But really, we are talking children, and young adults, and future citizens...That they feel comfortable in their skins in their schools and in this world takes precedent and teachers are now being given the burden to practice that as well.

Editor's Note: Next week Dan and Jake will explore "professional obligation" and offer some conclusions to their conversation. 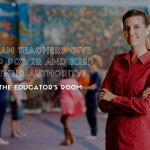 Can Teachers Give Up Power and Keep Their Authority? 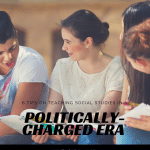 6 Tips on Teaching Social Studies in a Politically-Charged Era