A high school science teacher, Sarah Sorge has taught in private, charter, and public schools in grades 7-12. Her areas of interest include neuroscience, education, and problem-based science instruction. Recently, Sarah was awarded the distinction of New York State Master Teacher.

Bullying has received increased attention in the past few years.  Administrations have placed harder and clearer rules against student bullying, clubs and organizations have formed in schools to address bullying, and legal actions have taken place against students who have bullied other students to the point of self-harm.  Bullying, as we well know, can take many forms and can come from multiple avenues.  We even have in-services to address bullying among students and intervention strategies.  We know when and how to step in and take a stand against the bullying we see among students.

Here at The Educator's Room, we have written in the past about teachers who are bullied by our administration team, but what about when the student is the bully?  Every day within our classrooms we encounter students who are obstinate to the point of vindictiveness, and we are often told that we do not have control over our own classrooms.  Teachers being bullied by their own students occurs more often than most people realize, and often this is a form of bullying that goes unreported.  In the event that it is reported, sometimes nothing occurs or very little is done in terms of student discipline by the higher powers-that-be from in-the-school administration.

Let's start with a definition:  bullying is the use of superior strength and influence in order to influence and/or intimidate others in order to reach the desired outcome.  We know this definition well in regards to students bullying other students:  the clever put-down, the thrown food, the nasty names, the snide remarks, social media bashing, and the like.  What many fail to realize, however, is that teachers are just as much a target as students to the physical and verbal abuse of their students.

Media outlets have reported in the past about teachers who have been bullied and the footage caught on cell phone camera.  I read one article in which a substitute teacher was verbally and physically harassed by students.  Verbal taunts were used and the teacher was repeatedly flicked in the face by students' fingers.  When a report was filed, it was told that charges would not be pressed against the students and it would be handled within the school by the administrative team.  I read nothing regarding the consequences for those students. It makes me wonder, then, how many times incidences like this occur and go unreported because the teacher feels powerless and victimized to the point that they wonder if there is any purpose to even saying anything about the behavior within the classroom.

Studies have shown that there has been an increase in teachers undergoing medicinal treatment for depression and anxiety. Click To Tweet

Daily, we are faced with students who are borderline out of control and occasionally we see little in terms of administrative support.  Students have said that they are called down to the disciplinary office, are told to not do it again, and are simply released without further action.  Emails and phone calls to parents on behalf of the victimized teacher often go one of three ways:  unanswered, uninterested, or lip-service.  Unanswered is rather self-explanatory.  Uninterested is when a parent/guardian will fluff off the student's behavior and place all discipline (or even blame!) on the teacher.  Lip-service is when we have parents who say they will speak to their student, the student is apologetic, and then the behavior returns to the same force as it once was.  Sometimes, it even becomes worse.

Students have multiple avenues by which to bully their teachers.  First and foremost are in-class behavior: items being thrown, acting out, snide remarks, intimidating behaviors, etc.  Detention is often one of the forms of discipline we have, and yet often that has no bite.  For instance, in one school I know of, the teacher who gives the detention is required to sit with that student in detention the day the student serves it.  One colleague, I knew of had a student threaten physical harm.  Being her first year in teaching she followed the rules:  she called security, had the student removed, and issued detention.  She was unpleasantly surprised when the security officer returned that student to her at the end of the day to serve the detention with her.  The school was too large to assign security to monitor a detention hall and administration believed it was an issue that needed to be solved between student and teacher.  She spent the detention fearful and decided that she would never issue another one since it served no other purpose than to intimidate her further.  Another college friend of mine who is a teacher said that if he has problems with student behavior he would issue detention and send the offending student out of the room to a head of discipline.  Often he heard back that the detention was "taken away" by the administration team  after a brief discussion with the student, rendering his last ditch effort at discipline completely invalid.  The student found this laughable and found that it didn't matter how much he/she misbehaved because the disciplinary officer liked the student and played a sort of favorites.

Outside of school, Students bash teachers on social media sites consequence-free because they are protected by free speech Click To Tweet.  Thus, teachers are often rendered powerless in the face of bullying students and feel they have nowhere to turn to that will give relief.  In more serious instances, personal property is stolen or damaged (slashed tires in the parking lot, for example), and if the student is not caught in the act then little can be accomplished to support the teacher.

There are many teachers who silently suffer the torment of their own students, and anti-bullying campaigns rarely address students who bully adults.  We know that there has been a distinct shift in student behaviors regarding respect for adults in the past several years, and many reasons are given as to why this has occurred.  Unfortunately, few of them suffice when a teacher is shaking to enter his/her classroom each day or dreads going to work because of one or a group of students who will make it their personal mission to make that teacher miserable, knowing the administration will do little to support the teacher.

The question remains, now, is this:  what can we do to stop students bullying teachers?  I'd be interested in reading your comments and feedback below while I continue to research strategies to help the bullied teacher cope and take action. 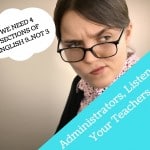 Administrators, Listen to Your Teachers Before Assigning Classes

Watch out for the "Saviors" (Charter School Diaries #14)

The New Teacher Smell
« Can you Nagaram an Anagram?
A Day in the Life of a Teacher in An Urban School »