A favorite New Yorker cartoon of mine is by Sidney Harris.

Two men stand in front of a chalkboard. Their demeanor indicates they are mathematicians. Scrawled on the chalkboard to the left of them is step one, a complicated mathematical formula. To the right of them, step three, is the solution to that complicated formula. In the center of these numbers and symbols,one of the men pointing to these words is the phrase, “THEN A MIRACLE OCCURS…”.

Under the cartoon is the caption spoken by one of the mathematicians: “I think you should be more explicit here in step two.” There are so many scenarios that could be explained by this cartoon, but lately I have been thinking about how this cartoon represents the process of education. The missing “step two” is the miracle of how a teacher helps a student to learn, since by definition, a miracle is an extremely outstanding accomplishment. Good teaching is that miracle that blends both science and art. The science formula here is the diagnosis of student needs and the application of strategies that address these needs. The art is the manner in which a good teacher does both.

For example, at the beginning of the 20th Century, researchers noted that those students who performed well on one type of test, say mathematics or verbal fluency, were also successful on other academic tests, while those who did poorly on one test tended to do poorly on other tests as well. British psychologist Charles Spearman, put forth a theory that a student’s mental performance across different could be consolidated in a single general ability rating, the g factor. In 1983, American developmental psychologist Howard Gardner countered with his Theory of Multiple Intelligences. He suggested that a measuring student’s intelligence should also include the following considerations:

Gardner’s theory has been adopted by educators, including Sir Ken Robinson, an English author, speaker, and international advisor, who has stated that,

Many highly talented, brilliant, creative people think they’re not — because the thing they were good at at school wasn’t valued, or was actually stigmatized.

He has noted that organizing students by birthdate is not the best determiner of learning saying,

Students are educated in batches, according to age, as if the most important thing they have in common is their date of manufacture.

While there is a degree of science used in the “miracle” step two of the cartoon, the degree of art is trickier. Science is valuable to education as measuring the student; art is valuable to education because the art of teaching has an effect on the student that cannot be measured. The miracle of good teaching is a blend of the two, a blend of science and art for each individual student.

As to those mathematicians in the cartoon who need to be more explicit in step two? They should ask a teacher about performing miracles. 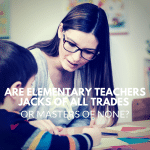 Are Elementary Teachers Jacks of All Trades or Masters of None?
« Educators Waiting for Mr. Rochester
A New School Year: Here Comes the Fear Again »