I have a son. He is developing and growing before my very eyes and it is the most beautiful thing that I have ever seen. Over the course of his life, I know that there will be people who will critique his abilities and skills. There will be people who will encourage him and there will be others who will attempt to discourage him. I don’t even doubt that there will be individuals who will have the audacity to question his upbringing – people who question the way my wife and I have led him in life. People can say what they want and they can think what they want, but my son is my child. He is my responsibility and I will not tolerate anyone who suggests that he is incapable of meeting any goal he sets out because of the person he is or because of the way he was raised. My job is to raise my young Black man in American society; a society that institutionally and historically has no need or regard for his abilities, his skills or even his life.

When we think of the education of urban and inner-city students, many of whom are Black and Latino, there are those who believe that many of these students are incapable of success in college and in life. People may act like they don’t believe that, but the reality is that the opinion of many “savior” educators – people who believe that their methods of teaching and learning can improve the performance of urban students – when they think of Black and Latino students with regard to the gap in academic achievement between these students and Whites and Asians, it is that culturally, they are incapable of learning due to having little or no work ethic, or having little or no desire for intellectual stimulation. For many of these “savior” educators, they believe that their philosophy is the tried and true way to help any student; even the students who struggle the most.  And if their sacred philosophy fails with high needs students, then it wasn't the system that failed them, but it was rather the student that failed themselves. Many of these “saviors” come from political and philanthropic circles and then some come from the university; academics who couldn't teach someone to be stupid. I had an encounter with one this week.

Last week during Spring Break at my school, I was asked by our Chief Academic Officer (school leader) to assist her with drafting some courses for the Liberal Arts Concentration at our school that would be starting in the fall. Our school founder and board of trustees chairwoman hired a Rutgers university professor of English & English Literature as a consultant to write curriculum for the concentration, which has a focus of the humanities and the social sciences. She drafted a list of courses and descriptions that were heavily focused on the humanities and little on the social science side. She was focused on courses that dealt with the Greco-Roman tradition. Not that it is a bad thing, but throughout this country, Black and Latino students get more than enough of Greco-Roman and European historical and literary information and not enough accurate historical and literary content about and written by and about people who look like them. Students who are raised in the inner-city or in an urban area, and attend schools in these areas, experience and are aware of the injustices and inequities place upon them while interacting with the institutions of the United States but are both (1) unsure why things are the way they are and (2) have no way of articulating how they feel about it. My CAO agreed with me and so I put together a brief initial proposal, at her request, of some courses and provided some descriptions to be presented to the board of trustees’ curriculum committee schedule for Friday (today).

I was asked to contact the Rutgers professor to work with her on drafting the course descriptions – which is something I didn’t want to do because I didn't need her help to do that, but I followed marching orders. I emailed her last week and I cc’ed my CAO. I got no response. So I went ahead and drafted the concept for the courses and I sent over my draft to my CAO. We were supposed to have a meeting to discuss the course descriptions prior to the curriculum committee meeting on Thursday afternoon. I got an email from the CAO with all interested parties, including the professor, cc’ed asking what time would be best to meet; keeping in consideration the schedule of the professor. I knew the professor contacted the CAO to ask what the hell was going on and that she thought she was the one writing up the courses and why was I now writing at the behest of the CAO. I happened to have a meeting with the founder and board chair of our charter school yesterday, immediately before a meeting she was having with the CAO and the professor. When I left the office of our founder, I greeted the pair as they sat outside her door and my CAO gave me a curt hello while the professor gave me a half-hearted smile that was more condescending than polite. During our curriculum committee meeting today, the university professor was not there. Our board chair was upset with her due to the tussle they had during their meeting yesterday that followed mine. The professor trashed my work, essentially questioning the necessity and the quality of what I had put together.  That is fine. I certainly do not need the validation of a university professor to know that I know what I am talking about. But what struck me is what the board chair said at the meeting this morning regarding the professor’s belief about our students that she expressed during their meeting. She (the professor) said, according to my board chair, that our students had a horrible work ethic, they had no desire to read and that they were incapable of passing a 099 level non-credited writing college course and that she wouldn't even consider teaching them at the college level. She completely dismissed the abilities and skills of our students, some of whom already passed with grade no less than a C an English Composition 101 course. The board chair went at it with this professor for 3 hours yesterday and I could tell it was rough… when we had our meeting yesterday and the professor walked in the room, she looked like she had been in a prize fight.

Educational leaders must absolutely stop bringing in these pseudo-educator academics that have a disingenuous and lackluster desire to help black and brown students; individuals with little or no compassion, little or no experiences working with urban student populations and plenty of false and misguided concepts of why black and brown students poorly perform in public schools. That Rutgers professor does not have a heart for our children – she never did and it shows. She should have never been hired in the first place and my board chair brought her in and you know what, that is her fault. Plain and simple, if they (academics, philanthropist and politicians) are not open to discussing the issues of educational injustice and how race and class impacts the way in which the urban poor are educated, then keep them all out: we don’t want them and we sure as hell don’t need them.[/fusion_builder_column][/fusion_builder_row][/fusion_builder_container] 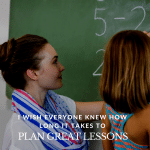 I Wish Everyone Knew How Long It Takes to Plan Great Lessons
« Part II: How Does That Sound? Reading with Fluency
The First Amendment and Student Dress Codes »