I received a powerful but simple text message from my state assemblyman hours after the January 6th siege on the National Capitol: “Your job as a civics educator has never been so important.”

And yet, for legions of American civics teachers who have witnessed a titanic and generational hollowing out of democratic norms, historic knowledge, and simple constitutional awareness in our students and broader public, last week’s national calamity was not as shocking as it should have been.

For years, educators have wondered if our colossally deep level of civic ignorance would have a day of reckoning. We wondered what it would look like and the form it would take. We wondered if there was a price to pay when citizens don’t know anything about the Founding, the Civil War, or much about current events. We wondered how a republic could long endure when at least a third of its citizens cannot name a single branch of government.

Tragically, we got our answer at the National Capitol as both chambers of the Congress met to certify the election of Joe Biden as America’s 46th president.

Quite simply: this is what can happen when Americans forget who they are, where they came from, and most of all, what binds us together, yoking us into a singular “We The People.” Democracy isn't easy. Self-government makes significant demands of us. Our way of life bristles with fragility, which is why the people we elected--the captains of the democratic barge we find ourselves collectively riding--matter so much.

And yet, we have forgotten that integrity in office matters.

It mattered when Washington retired twice—once at the end of the Revolutionary War and again after two terms of office. It mattered in the late 1790s when John Adams refused to go to war with France, despite the unpopularity of his position. It mattered in 1855 when Abraham Lincoln gave up a seat in the national Senate to ensure an anti-slavery candidate served in the position. It mattered in 1960 when Richard Nixon gracefully conceded his election to John Kennedy, knowing full well about voting irregularities in multiple states.

Most students, of course, don’t know these examples.

This is what it looks like when we hold our leaders to such low ethical standards when we forget that dishonor in American politics is not in losing, but in dishonorable behavior itself.

Dishonor in the American public arena has a specific tone and texture to it—it looks like vainglory and sounds like demagoguery. It is Catiline murdering Roman consuls and trying to overthrow the Roman republic. Indeed, during the early days of the American republic calling a politician, a “Catiline” was the worst of insults that could possibly be hurled. It is Aaron Burr conspiring against his own country to establish a new nation in the Southwest. It is a president of the United States refusing to concede defeat, riling up angry supporters with endless falsities, and telling them to march on the capitol in the midst of a constitutionally mandated joint session of Congress.

Again, most students do not know these examples.

Finally, this is what happens when Americans forget civic virtue matters. Civic virtue is more than showing up to vote every four years and obeying the law. Civic virtue is honoring the will of the demos, of recognizing that there are legitimate political outcomes that vary with one’s own preferences and voting patterns.

It’s not just that the Trump years have conditioned many of my students to view politics as simply another zero-sum reality game show. It’s not just that they view political discourse as an endless and cynical cycle of power-mongering, institutional one-upmanship, or terse tweeting at one another. It’s not even that they view the Machiavellian tenor of House of Cards as fact and the idealism of The West Wing as naïve fiction. It is that they believe civic virtue is for other people, for suckers and weaklings, for those who cannot find a way to bully, belittle, and thunderclap their way to power.

Sadly, most students do not know that leadership in a republic is inextricably tied to more than Olympian ambition. It is tied to a specific definition of public character. Some of the greatest biographers of the past half-century—Robert Caro’s grand project on Lyndon Johnson or Edmund Morris’s triad of books about Theodore Roosevelt—certainly chronicle leaders of booming ambition chalked full of folly and hubris. And yet, both men understood that the interests of the nation always transcended the ambitions of their office. It is why both men declined to run for another term of office.

Instead, public character means using individual power to serve a higher political principle. It means individual ambition is supposed to be the handmaiden of justice. It means recognizing the fragility of freedom and doing one’s part to renew the American Experiment. After all, we honor those who help to peacefully pass the torch of constitutional self-government, not those who extinguish it in the shadows of petty vanity and febrile narcissism.

So, where do American teachers go from here?

There is no shortcut to a solution, no panacea, no magical political elixir to distribute like a COVID-19 vaccine. We have to do the hard work of teaching our children these lessons. We must teach them what is glorious in our history—our Founding, our Reconstruction, our different marches towards a more perfect union. We must also teach them about our failings and our follies, acknowledging where we have not upheld our highest ideals, even to this tragic day.

But most of all, we must remember that being an American must be learned. Our birth might grant us citizenship and an American passport, but it does not imbue us with the values, knowledge, or civic habits that make our way of life possible or renewable. Last Wednesday's events should serve as a stentorian reminder that America is renewed in the classroom. Ordinary men and women can certainly govern themselves. But they cannot do it alone. We teachers (and parents and leaders) must do the work to help stitch America back together again. 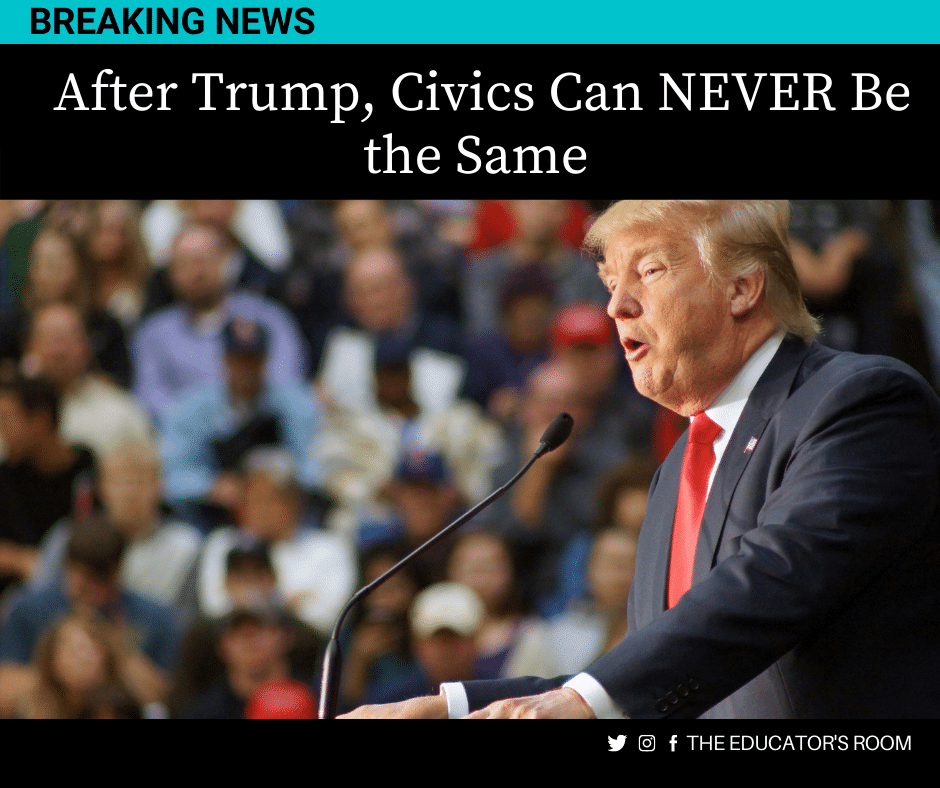 [Opinion] Barack Obama: A Role Model for Teachers and Students
« Dear Betsy, Thanks for the Memories
Teachers, If You Can’t Tell the Truth, You Might Need a Different Job »