America Already has a wall, it's made up of teachers. | The Educators Room Skip to content
Previous Next

America Already has a wall, it’s made up of teachers.

I debated whether to encourage my sophomore Global History students to watch President Trump’s address on Tuesday, January 8, 2019.  Since 2016, it has been difficult to navigate how to incorporate civics and current events into my social studies classroom.  I desire student awareness, but I am concerned that any discussion of his speech, or his presidency in general, might lead to parental concerns of misperceived bias on my part.  Furthermore, I don’t know if I can be as objective as I once was.  There are universal truths concerning human rights (which is a topic in the mandated curriculum that I teach).  However, at every turn, the leaders of our country are declaring that truths and facts are not necessary.  Instead, fear and the demonizing of the other is a winning strategy for achieving, consolidating and maintaining power.

Instead, fear and the demonizing of the other is a winning strategy for achieving, consolidating and maintaining power. Click To Tweet

The other is sitting in my classroom.  She is on the Step Team I advise.  He is walking in the hall joking innocently with his buddies.  The other (call them immigrant, brown, black, Latino, Arab, etc.) is part of the student body at my school, and they are fully conscious that when Trump says we need a wall to keep people out of our country, those people look like them. They fully understand Donald Trump, Jr.’s message when he relates foreigners with zoo animals.

NPR recently released an article citing that politics have negatively impacted education across the country.  The piece, entitled: “Virginia Study Finds Increased School Bullying In Areas That Voted For Trump,” focused on a Virginia study concerning an increase in bullying in schools where support for Trump was high in 2016. The Trump presidency has impacted education more than any administration in my twenty-three-year career.

I can attest to the impact of the 2016 election in the 2016-2017 school year.  In a piece published by Teaching Tolerance, entitled: A Teacher Overhears: “Yeah, I would have made a good Nazi,” I explored how a student was blatant in his sympathy for extreme nationalism.  He wore his MAGA attire proudly and frequently questioned the history of marginalized groups, including wondering aloud why Jews did not fight back more aggressively during the Holocaust. The campaign rhetoric concerning the Muslim ban and the building of the southern border wall (that Mexico was going to fund), emboldened this student.

The impact of the proposed (and judicially challenged) Muslim ban also became a topic that demonstrated how Washington, D.C. could impact a large suburban high school in central New York.  I explored this in a piece also published by Teaching Tolerance, entitled:  “I Was Born n September 11, 2001.”  Luckily the student featured in that article experienced a happy ending–her family became citizens and are flourishing.

For all of my writing, there are so many stories I have not published.  There is an example of a parent telling me that his family proudly wears the Confederate flag.  There is the student who complained to an administrator that I was focusing on women in history too much.  As I reflect on how teaching in the age of Trump has infiltrated by discourse with students concerning not just current events, but also historical themes, I am exhausted by my reserve.  I try my best to discuss many sides of controversial issues.  However, sometimes I must uphold universal truths.  I am compelled to say things like:  “Seeking asylum in a foreign country is a form of legal immigration, ” or “Nationalism is not a negative concept, but extreme nationalism leads to hate and discrimination.” I take a deep breath when discussing the Syrian Civil War, women’s’ lack of rights and opportunities in many countries, and religious distinctions.  I try to uphold pluralism, knowing that some students do not live with families that honor that concept.  I defend Montesquieu’s Spirit of the Laws as a view that the three branches of government can save citizens from tyranny. The social studies and the humanities, in general, are the bricks in the wall blocking the denial of human rights.

I attempt to defend the American system while I see it crumbling. I am the wall that keeps out the worst of human nature.  As teachers, we are the wall against injustice, discrimination, racism, sexism, homophobia, antisemitism, and Islamophobia.  We are the wall against fear becoming a tool of terror. We are the keepers of the light, the defenders of democracy.

Although recently the teaching profession and all that we value as intellectuals have been attacked, that is when educators do their best modeling for our students. Teachers are striking across the country, marching in their sensible shoes in defense of the most vulnerable in our society.  Education, especially public education is the wall against hate and bigotry.  Public education is the great socio-economic leveling agent at a time when people who “already got theirs,” are scared of others getting their fair share of the American pie.

If President Trump wants a wall, he already has one.  He can reopen the government at any time.  He can give 800,000 people paychecks denied beginning tomorrow. He already has a wall, but it is one that he is attempting to dismantle, not build.  The good people of America, especially the over three million public school teachers, will continue to place their bricks one by one to protect their students while preserving the American values of integrity, truth, participation, representation, tolerance, and education.  Teachers are also patriots, Mr. Trump. We will continue to build our wall against you. 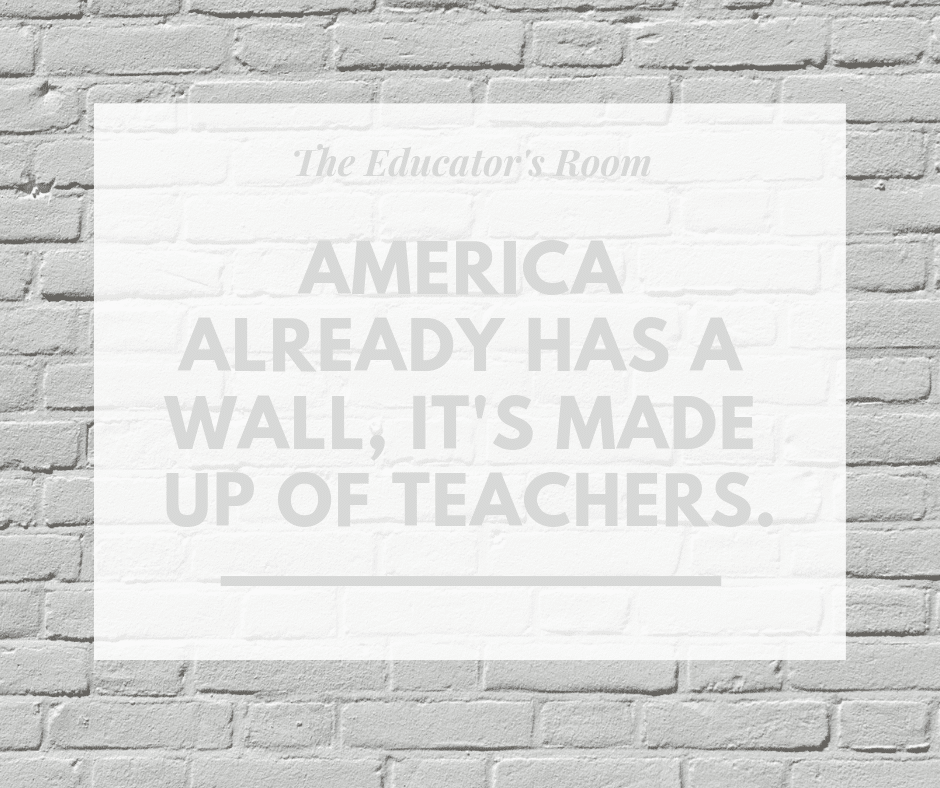