Editor's Note: Over the past year there has been a growing number of states seeking to surveil teachers and curtail the content and curriculum they teach. Many states have implemented laws that limit conversations about race, racism, LGBTQ+ identities, and other topics. In this context, alongside the recent roll back of abortion rights by the Supreme Court, we asked our writers when is it okay for teachers to disobey? You can read another response by Laura Sofen here.

About a month ago, an internet troll tried to get me fired.

In an end-of-the-year survey, a straight, White student said the one thing they'd change about my teaching style was my pride flags and Black Lives Matter posters. I posted a reel on my Instagram, standing by my decision to affirm students' identities in my classroom. I captioned it, "Sorry not sorry if affirming people's humanity makes someone uncomfortable."

The hashtags I used, #protectqueerkids and #blacklivesmatter, clearly struck a nerve because, within an hour, I had 20,000 views. There were also several comments about how I was "grooming" and "indoctrinating" children.

Because the world already has enough toxicity, I blocked those commenters and moved on with my life. But, the next morning, I found out that one of those commenters had found where I worked and emailed the school board with a link to my account, asking for me to be fired.

I'm not shy about my beliefs and what I post, but I definitely didn't think a video of me lip-synching to Britney's "Oops, I did it Again" would make it to my school board.

Teaching Has Always Been Political

I recently read Ida B the Queen: The Extraordinary Life and Legacy of Ida B. Wells. Her life and activism inspired me and I found we had a few things in common. Besides sharing a birthday, we are both teachers and writers.

Wells was a Black female journalist, activist, and feminist who fought tirelessly for racial justice and civil rights. Her life was groundbreaking in so many ways. She sued a railroad for segregation, exposed the realities of lynching in her writing, owned two newspapers, founded organizations fighting for Black suffrage, and was a champion of educational equity.

Most relevant to my recent life, Wells was fired from her teaching job in Memphis in 1891.

According to the book, "She was so bold and determined to expose every form of inequality that she even had the audacity to criticize the Memphis school system–her only source of full-time income. She wrote about the vast differences in pay, resources, and teaching environments between white and Black schools. As a result, she was out of a job."

A year later, after publishing her expose on lynching, her press was burned, and threats to her life drove her from Memphis to Chicago.

But none of that stopped her.

She researched and wrote landmark pamphlets and articles "pioneering what is now called 'data journalism'...amassing the details of anti-Black crime nationwide." She worked tirelessly for what she believed in until her death in 1931, and her legacy lives on.

In 2016, the Ida B Wells Society for Investigative Reporting was founded by Black journalists, including Nikole Hannah-Jones of the 1619 Project, to provide training and mentorship for journalists of color to walk in Wells' footsteps.

In 2020, she was awarded a posthumous Pulitzer Prize "for her outstanding and courageous reporting on the horrific and vicious violence against African Americans during the era of lynching."

Living in Ida B. Wells' Legacy

Don't get me wrong; my millennial White lady problems don't even scratch the surface of what Wells fought for and dealt with.

She lost her job and had serious threats to her life. I only received digital word vomit and an HR assurance that my job was safe.

She was born into slavery and witnessed racist violence firsthand. I am just advocating for teaching the truth from the comfort of my classroom, the safety of my whiteness.

But, I can't help but feel comforted thinking that there might be a small part of her that would be proud of me and the work similar #radicaleducators are doing.

She believed that speaking out about segregation in her school was worth losing her job. I won't take down my pride and BLM decorations, or remove Dear Martin from my curriculum. I won't stop writing critically about our education systems, even though there are people who think I should.

I'm a teacher, and therefore it's my job to share lessons of kindness, compassion, critical thinking, and social justice. Maybe a student's discomfort is the start of a new way of thinking about the world and their place in it. Or maybe not yet.

But I'm proud of living with integrity, teaching in ways that assign with my values, and showing up for all my kids.

If I ever stop doing that, I don't deserve to share a birthday with the Queen. 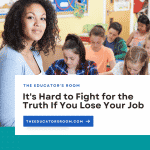 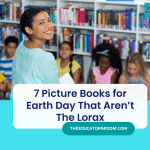 7 Picture Books for Earth Day That Aren't The Lorax 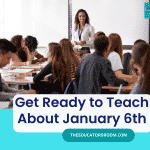 Get Ready to Teach About January 6th
« Where's the System of Support for Educators of Color?
Quinta Brunson + ABC Network Sued For Copyright Infringement For Television Show ‘Abbott Elementary’ »