There. I said it. I really and truly hate finals. I’m pretty sure it’s my least favorite time as a teacher. Two weeks before the end of each semester, all real teaching stops, and students move into review, prep and panic mode. They stress over facts not mentioned since September and scramble to put finishing touches on long procrastinated projects, all leading up to that final day where up to 20% of their final grade is on the line.

And let’s not forget the uncomfortable conversations every teacher recognizes that finish with some form of, “No, I will not offer you enough extra credit for make up for the fact that you refused to do any work this semester.”

It’s an interesting kind of hate though. It’s not one that seethes and festers. It actually dissipates fairly quickly, forgotten until the end of the next semester when I find myself wondering why I was so snippy with first period and nodding as I realize, “Oh, yeah. It’s finals time again.”

As this week was the first of my school’s second semester, I found myself pondering this amnesia. I walked in Monday morning fresh, happy and ready to go when just four days prior, I commiserated with colleagues, describing the “nail in my coffin,” Corey from 7th period, who when asked why after weeks of work, he hadn’t submitted his final character analysis for The Catcher in the Rye said, “Ummmm….so...I’m supposed to write about Holden?”

Sorry. I had to pause a second while I shook my head again.

So, why did it only take a weekend to change my perspective? Well, the best I can figure is that, quite simply, we were starting with a relatively clean slate. While the majority of my students were the same from first semester, some had moved periods, and, as teachers know, even one new student can change the entire dynamic of a class. These same students, now that grades were submitted, had fresh opportunity. Someone who had fumbled first semester could give it another try. We were all, on some level, starting again.

This is one of the beautiful things about teaching. [fusion_builder_container hundred_percent="yes" overflow="visible"][fusion_builder_row][fusion_builder_column type="1_1" background_position="left top" background_color="" border_size="" border_color="" border_style="solid" spacing="yes" background_image="" background_repeat="no-repeat" padding="" margin_top="0px" margin_bottom="0px" class="" id="" animation_type="" animation_speed="0.3" animation_direction="left" hide_on_mobile="no" center_content="no" min_height="none"]No matter how rough it gets in the classroom, we have built into the year a series of pauses and fresh starts. Click To Tweet We have a chance to take a breath, reflect and explore ways to improve. We have grading periods that end and fresh faces each September. We have the chance to begin anew.

I haven’t always had this perspective. Few who know me would describe me as an eternal optimist, and our current political climate is not one that inspires teachers, who often find themselves crippled by the whims of legislators and who work tirelessly beyond the contracted day only to see themselves portrayed as lazy and entitled, to see the glass half full.

But, here’s the thing. Sometimes it is. And I realized in order to survive in this profession, we have to relish when it is.

I’m not saying this because I believe in complacency. Quite the opposite, I believe that teachers need to continue to stand up for themselves and their students. They need to recognize injustice and speak to power. They need to be the voice from the trenches, the ones who remind Capitol Hill of what it is really like inside of a classroom.

But sometimes, just sometimes, we need to stop and recognize the parts of our job that make us smile.

So for me, as the newness of second semester wears off and we move into the months of March and April, another challenging time of year that because of SBAC, ELPA and AP we have come to call “testing season,” I can take a deep breath and remember that testing season will end, and my students and I will start a fresh unit, one unencumbered by the pressures of high-stakes testing, and this, at least for now, will get me through.[/fusion_builder_column][/fusion_builder_row][/fusion_builder_container] 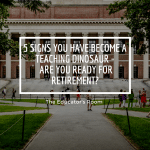 5 Signs You Have Become a Teaching Dinosaur - Are you Ready for Retirement?

Dissing the Family Crazies: A Christmas Story
« Decomposing Fractions: An Alternative for Converting Improper Fractions to Mixed Numbers
When Teachers Get Sick »