Studies related to teacher attrition have become ubiquitous. From the Gates Foundation to Harvard’s Project on the Next Generation of Teachers, to the Connecticut Center for School Change, educational researchers are searching for the enigmatic key to unlock a new understanding of the issue. The answer, however, remains elusive. Despite this treasure trove of studies, teacher retention has remained a problem without a solution.

Teacher retention is an important issue to be considered by district leaders on two fronts. First, there is a significant financial cost associated with teacher attrition. By virtue of the fact that teacher turnover is greater in urban districts, urban schools are burdened with this added financial weight, often in addition to austere budgetary conditions. Second, constant teacher turnover has deleterious effects on student achievement and the culture and climate in a school.

There have been several attempts to dissect the cost of teacher turnover: with some studies being more successful than others. Studies reveal that the per-teacher cost of attrition can be as low as $4,631 (in suburban districts) to $26,502 (in center city Chicago). A 2006 study conducted by the National Commission on Teaching and America’s Future revealed that the cost of teacher attrition weighs much heavier on urban districts than suburban: in both the financial and student achievement arenas (Watlington et al, 2010).

Studies have also confirmed that less experienced teachers are, on average, less effective (Boyd, 2009). This has great implications for urban schools where the teacher turnover rate is high. As urban districts implement reform in order to raise student achievement, teacher turnover creates an unstable faculty base, thus making it more difficult to implement reforms. In these schools, precious time and resources are being spent on recruiting and training new teachers, rather than on implementing academic intervention strategies (Boyd, 2009).

In the upcoming weeks, this series of articles will examine recent research concerning teacher retention and provide strategies that building level administrators can take in order to improve teacher retention. The focus of this series is on teacher turnover in urban districts; however, the tips and advice are applicable to all districts. This article will explore a few of the most interesting and counter-intuitive research findings regarding who stays in urban schools. Following articles will address:
• Hiring with an eye toward retention;
• Induction, on-boarding and mentoring;
• The impact of a collaborative school culture;
• The power of professional learning, teacher support and leadership opportunities.
The Educators’ Room encourages interested readers to leave questions, observations and remarks in the comment box following the articles. These comments will serve as the focal point for the final article.

Puzzling Research
The national supply of teachers is adequate to meet the demand. Universities and alternate teacher preparation programs have responded to a perceived teacher shortage by producing enough teachers to meet the nation’s needs. In addition to teachers new to the profession, there is an ever expanding pool of credentialed teachers who have chosen to leave the profession. The attrition crisis is one of distribution rather than shortage (Ingersoll, 2002).

In 2009, Morgaen Donaldson conducted a study looking into the retention rate (in urban schools) of teachers who complete a preparation program specifically designed to prepare teachers to teach in urban schools. Donaldson examined the retention rates of graduates of Harvard’s Teacher Preparation Academy. The surprising finding is that the attrition rate of these teachers is comparable to teachers who did not complete an urban-centric program.

Contrary to the common wisdom, low salary is not the motivating force behind the majority of teachers who leave the profession. In fact, in the 1994-1995 Teacher Follow-up Survey, less than a quarter of the teachers who had left teaching cited salaries to be a determining factor (Ingersoll & Smith, 2003).

Finally, a fascinating factoid: when the statistics on teacher attrition are compiled and presented, more often than not, included in the numbers of people leaving the professions, are teachers who are leaving the classroom for administrative positions. Certainly, it is a loss to have an effective teacher leave the classroom; however, that person is still an educator of children and continues in the educational profession.
Next up: Building Long-term relationships: Hiring with an Eye toward the Future. 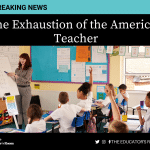 The Educator's Room Conference- "Empowering Teachers as the Experts"
« Recalling ISTE 2014 : Sarah’s Report
Should I Stay or Should I Go? »