One of the driving forces behind the advancement of bubble-test tyranny in our school systems today is the concept of data-driven decision-making. Back before we tested every student in every subject on almost every day of the year, cigar-chomping school administrators just pulled decisions out of their backsides and hoped they worked. They threw the proverbial spaghetti at the wall to see if it would stick. This is why the USA was a wasteland of writhing ignorance before Pearson and ETS came along and saved us.

The poor benighted administrators operating in the pre-Pearson epoch couldn't be sure if the decisions they made actually did any good. How could they possibly know without any bubble test scores going up or down? These were the dark ages of education, when decisions were made based on human interactions and personal feedback.

The danger, of course, was that any number of outside influences could sway decision-making. Maybe the superintendent adopted a reading program because the salesman was a good old boy or because a textbook company was sending him out golfing. Maybe a principal’s brother-in-law was really gung-ho about a certain method of teaching math.

A great danger in the pre-data era was for an anecdotal scenario to capture the imagination of a school’s leadership and prompt administration to fixate on it and invest limited time and resources attacking a problem that was really never primarily to blame for poor results in the first place.

Data-driven decision-making was meant to put us on the path to solid, objective planning and execution, to free us from the pitfalls of anecdotal or peer-pressured decision-making.

Data-driven decision-making is now enshrined in statute. No Child Left Behind, along with many state education laws, requires the collection, disaggregation, and reporting of many kinds of data, with a particular emphasis on student performance on bubble tests. States have since invested a great deal of their educational resources in tools for generating, collecting, analyzing, chewing up, spitting out, and reporting data. They have invested in the development of robust systems and complicated algorithms that aim to take student data and tease out a teacher’s role in the student’s scores. These systems have had mixed results.

I am reminded of all the Presidential polls and the myriad conclusions drawn from them. At the present time, schools are in ample supply of data, just as the pundits had a wide selection of polls to choose from. Sadly, like the pundits, we administrators can quite easily pick and choose the data that says what we want it to say. I’m reminded of the two Texas education privatizers who recently—within days of one another—seized on data to prove that our schools are failing miserably and therefore need more testing-and-labeling and that at the same time our schools are doing wonderfully because of the past twenty years of testing-and-labeling.

Spin, spin, spin. Welcome to our children’s education in 2012. You think this is really about the kids?

The data is there; in fact, there's a glut of it. What we lack in education today is a Nate Silver. We need someone honest and irreparably factual, someone who sees through the rhetoric to the facts of the data—someone not compromised by their affinity for a particular policy or approach or, in the case of Sandy Kress, by a regular fat lobbyist paycheck from Pearson Test-o-matic.

The dangers that data-driven decision-making seeks to ameliorate are entirely real. Decisions shouldn’t be made based on whims, fantasies, prejudices, or fallacious reasoning. But those dangers don’t exist solely at the campus or district level. They exist—indeed, they are flourishing—at the state and national policy-making level.

Politicians—do as you have said we administrators must do. Show us some data-driven decision-making when writing our laws.

No bill should be voted upon until it has a solid basis in data.

We have seen a number of bills entertained lately with the intent of addressing a supposed plague of voter fraud. Except that the voter fraud, you know, really almost never happens. If this were a data-driven situation, the legislators would have to definitively establish that their limited time was best-utilized in addressing this issue.

Data-driven politics would require our leadership to write a National Improvement Plan. In this plan, they would have to establish a number of goals, and under each goal we would get to see a number of strategies. With each goal, there would be one or more performance objectives: these objectives would be measurable  so that we could see if our leadership actually met its targets. And an actual person would be assigned the responsibility of implementing each of these strategies, according to a set timeline.

What we currently have is aimless, spasmodic leadership, leadership prone to wild goose chases whose aim is to “please the base,” as opposed to doing what’s best for the nation.

Case in point, in the incomparable Lone Star State: Senator Dan Patrick, new head of the Senate Education Committee, has announced that private school vouchers will be the “photo ID bill of this session.” (He believes that’s a good thing.)

Why is Senator Patrick so adamant that school vouchers be the focus of the next Texas legislative session? Because the data says they work? No. Studies of voucher systems in Milwaukee and Chile have shown them to do nothing to improve academics while exacerbating inequities and segregation by race or class. Even a strong voucher advocate has admitted that the results of voucher programs haven’t been as “positive as advocates originally hoped.”

So it isn’t a thorough study of data that has Senator Patrick wanting vouchers so badly. But if it isn't data, then, what’s his motivation?

Let’s hear from the good senator himself: “Our base has wanted us to pass photo voter ID for years, and we did it. They've been wanting us to pass school choice for years. This is the year to do it, in my view.”

It isn't that vouchers work or that they are good for kids. It is merely politics. It’s peer pressure. If the base wants it, data is unnecessary. And, as in the case of a principal adopting a practice because a buddy really, really wants him to, this kind of politics isn’t good for the nation.

Dan Patrick is operating the way those bad old non-data-driven superintendents used to operate. He is singlehandedly pushing (a.) an expensive program (b.) with no proven record of working (c.) with no meaningful input from stakeholders (d.) that is supported by his friends and by those who stand to make a profit, and (e.) that has been soundly rejected in the past. All this, based not on data, but on handy anecdotes of bad public schools and good private ones. Welcome to the age of unreason, the era of the fallacious leader, less interested in truth than in victory for his buds.

When you aren’t data-driven, bad ideas never die. They just hibernate until the next ideologue reanimates them and tries again. 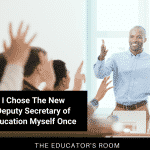 OPINION: I Chose The New Deputy Secretary of Education Myself Once
« Parent Teacher Partnerships Provide the Best Literacy Opportunities
Questions Please! An Approach to Higher Learning »